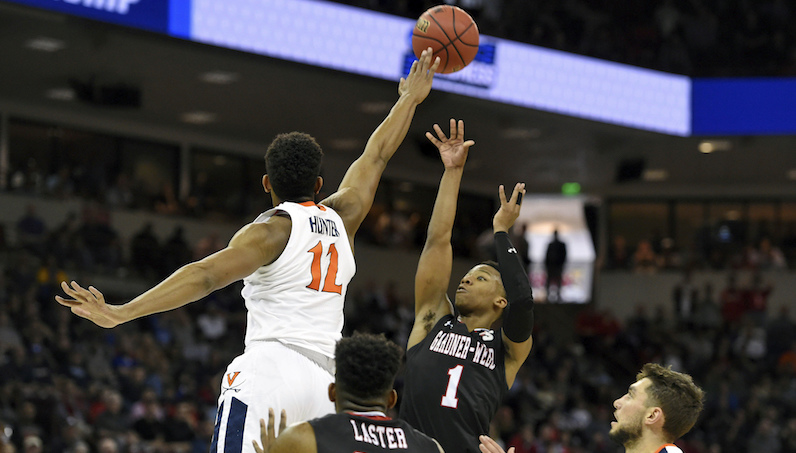 In the opening round of the 2019 NCAA Tournament, Virginia basketball was able to exercise some 16th-seeded demons. However, Friday’s 71-56 win over 16th-seeded Gardner-Webb didn’t come without some nervy moments, too.

Right out of the gate, Virginia was uncharacteristically sluggish on offense. At one point, UVA (No. 13 nationally in turnover rate) turned the ball over on five straight possessions. The larger, anxiety-inducing concerns came on the other end of the floor, though.

Head coach Tim Craft and Gardner-Webb did a wonderful job scouting and preparing for Virginia. The Bulldogs spread the floor and sliced up Virginia’s hard hedges with savvy ball-screen slips. The maneuver produced a variety of quality looks at the rim. (It wasn’t until Jay Huff entered the game, late in the first half, the UVA countered and flattened out its hedges.)

At multiple points in the first half, Virginia trailed by 14 points — it’s largest deficit of the season. Gardner-Webb led 36-30 at halftime, and all of the UMBC nightmares started to rise to the surface again.

The second half was all Virginia, though. Empty-side ball screens with Mamadi Diakite (17 points, 8-of-10 FGA) got UVA going downhill on offense. From there, everything else opened up. Ty Jerome (six assists) started getting to his spots as the engine of Virginia’s half-court offense. And when Gardner-Webb tried to switch up and go zone, the Cavaliers shredded them. In the midst of all of that, Virginia went on a 12-0 run that buried GW.

Once again, De’Andre Hunter was brilliant. Tony Bennett and UVA leaned on Hunter’s one-on-one abilities and he delivered. Hunter went for 23 points on 9-of-16 shooting — his 10th game this season with 20+ points; he also grabbed six rebound and blocked two shots.

With the win, Virginia moves on to a second round matchup with No. 9-seed Oklahoma, which demolished Ole Miss earlier in the day on Friday.