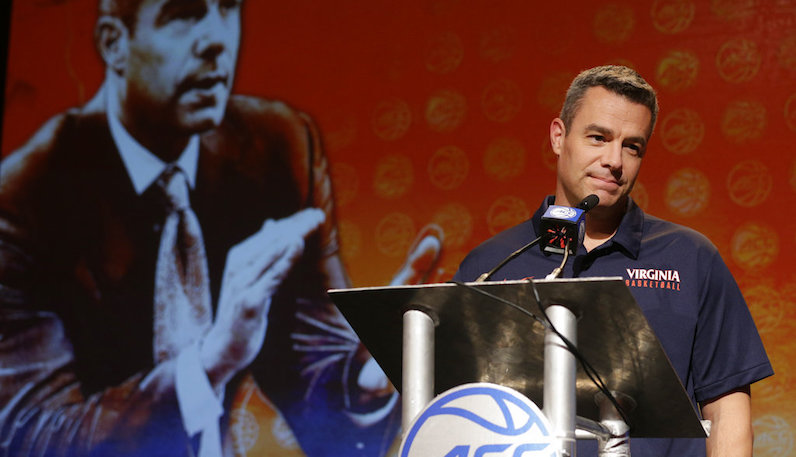 During his four years in Charlottesville, London Perrantes played a lot of basketball. Over 4,400 minutes worth of basketball, to be slightly more exact. Perrantes was also heavily-involved in whatever Virginia did on offense — but never more so until his senior season.

In 2016-17, Perrantes was one of just three ACC players with assist and usage rates above 24 percent. The other two players were Dennis Smith Jr. and Bryant Crawford. He was also incredibly valuable to Virginia’s offense in leverage situations.

If you thought it seemed like Perrantes took and made a lot of shots for UVA at the end of the clock, your perception was right. Let’s check the numbers.

No time, no sweat

Last season, Virginia basketball ranked dead last nationally in terms of adjusted tempo — 59.2 possessions per game, according to KenPom. The Cavaliers have ranked outside of the top 300 in pace in all eight of Tony Bennett’s seasons at UVA.

A result of that: Virginia attempts a lot of field goals late in the shot clock. That was also Perrantes Time, too. According to Synergy Sports, 8.1 percent of Virginia’s possessions occurred with under four seconds left of the shot clock.

Within the ACC, that tied with Miami — another slow-paced squad — for the highest percentage of possessions to have been used with under four second left on the shot clock. It also ranked 19th in all of Division I basketball.

As one could probably guess, Perrantes used more of those possessions than any other player on Virginia’s roster.

Get the shot up

Perrantes used 450 possessions last season, per Synergy. 9.6 percent of those possessions came with under four seconds left on the shot clock. Of ACC players to have at least 30 end-of-clock possessions, Perrantes’ 9.6 percent rate ranked fifth most in the league.

Only Josh Heath, JaQuan Newton, Bruce Brown and Matt Farrell ranked higher. Not surprisingly, all four of those guys are ball-dominant guards on offenses that prefer to play a little slower.

In his 43 end-of-clock possessions (tops on Virginia), Perrantes attempted 37 field goals, making 12 — 32.4 percent. He drew a shooting foul on 11.6 percent of these possessions, too, which ranked No. 1 amongst ACC players (30 or more possessions).

According to Synergy, 10 of these field goal attempts for Perrantes came on isolation plays — 40 percent shooting, one point per possession. That’s pretty good.

Virginia basketball: Who steps up this season?

Without Perrantes, Virginia basketball will need more than just a player that gets them in and out of their sets. The Cavaliers need a player that can get buckets late the clock — a time when it’s statistically more challenging to score. That’s compounded by the fact that Marial Shayok, who was second on the team in less late-clock possessions, is gone now, too.

Fortunately for Tony Bennett, he has some really interesting options — especially from within his backcourt.

Virginia basketball’s offense is heavy on screens — an endless supply of off-ball movement and flare screens. However, the ball will reside primarily in Ty Jerome’s hands. It’s his show to run in Charlottesville.

That could bode well for Virginia. In the chart above, Jerome only used 15 late-clock possessions; however, he was efficient in these sets: 0.93 points per possession. His 53.8 percent adjusted field goal rate demonstrates that he hit a couple three-balls here, too. The turnover rate of 13.3 percent is high, but emblematic of a freshman guard in stressful situations.

Devon Hall — 1.17 points per possession — is a sneaky intriguing option; so, too, is rising star Kyle Guy.

Guy experienced bits of streakiness in his freshman season, but he exudes confidence, and can absolutely bomb off the catch. According to Synergy, Guy posted an effective field goal rate of 63.1 percent on catch-and-shoot attempts, which is sizzling. That will come in handy for Virginia basketball without Perrantes.

Of course, all of this comes with the caveat of small sample theatre; it would be unwise to read way too much into these number. They should, however, inspire some confidence.

Isaiah Wilkins proved to be an effective scorer in late-clock instances, but he’s taking different shots than Jerome or Guy. It will be interesting to see how he, Jay Huff and DeAndre Hunter (frontcourt scorers) help in this department, though.