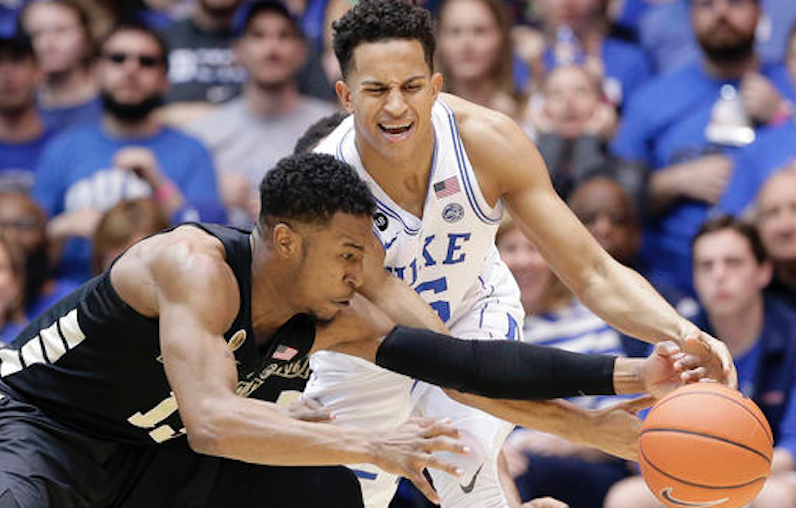 Last month, North Carolina’s Joel Berry announced that he would return to school for his senior season. In May, Duke continued its arms race with UNC when 5-star recruit Trevon Duval committed to the Blue Devils. Two of the ACC’s best guard are headed to the lottery of the NBA Draft — Dennis Smith Jr. and Donovan Mitchell. London Perrantes and his high-top fade are gone from Charlottesville, too. As the league turns the page to next season, we will look at the best point guards in the ACC for 2017-18. You can weigh in below, too, on who you think will be the league’s best point guard.

In Part 1 of this series, we will go in-depth with the case for Wake Forest’s Bryant Crawford as one of the best guards in America.

Wake Forest needs Crawford to become an even more prolific lead scorer in 2017-18. A major function of Wake’s offense this season was the single high pick-and-roll; Crawford and John Collins formed a fantastic partnership here.

The Demon Deacons ran this action on the sides, too, and with the floor spaced nicely with shooters Keyshawn Woods (43.8 3FG%) and Austin Arians (42.7 3FG%), it was tricky to defend. If you don’t rotate off the weak side, Collins is dunking on your soul. But if the help-side defender digs down to bump Collins, then Woods is open in the corner for a trey. Pick your poison; something is open.

According to Synergy Sports, on pick-and-roll possessions when Crawford either shot or passed the ball, Wake Forest scored 1.01 points per possession. That ranked 12th among 124 Division I players who ran at least 300 of these possessions.

All of that is great; however, Collins is gone. Not only did Collins finish at a ridiculous rate at the rim, but his gravity collapsed defenses, which opened passing lanes for shooters. Wake Forest, per Synergy, ranked No. 11 nationally in points per possession on spot-ups (1.1).

It is critical for Crawford to find another pick-and-roll batterymate. Dinos Mitoglou emerged as one of the premier post-up threats in the ACC last season; he could replace some of Collins’ production, although he may be more comfortable popping beyond the arc after screening. Doral Moore and Olivier Sarr could be options, too.

Now comes the hard part. For Wake Forest to come anywhere close to repeating as a top-10 offense — the Deacs ranked No. 7 nationally in adjusted offensive efficiency in 2016-17, per KenPom.com — Crawford has to win one-on-one matchups. He is now the team’s best player and certainly capable of that. Crawford, on a somewhat limited sample, caught flames in isolation. The sophomore guard scored better than 1.3 points per possession (50 FG%), which ranked No. 4 in Division I.

The absence of Collins will be felt — no duh. But Crawford won’t be on an island. Woods is one of the league’s best perimeter shooters, but he also has some dribble-drive mojo. He can finish at the hoop. According to Synergy, Woods shot 60 percent on runners and 68 percent on non-post-ups around the basket.

Chaundee Brown — a top-40 prospect — is in the mix as well, and Wake Forest, led by Crawford, has the artillery to trot out a ferocious three-guard offense.

Crawford shot 34.2 percent on three-pointers this past season, which is essentially average. His shot from deep improved as the season went along, too; he connected on nearly 38 percent of his triples in ACC play.

For his career, Crawford has averaged five three-point attempts per game. He’s a career 34.7 percent three-point shooter. That is another area, though, where Crawford can take another step.

As a sophomore, Crawford connected on a paltry 29.2 percent of his catch-and-shoot opportunities. He scored 0.85 points per possession on catch-and-shoots, which was one of the worst numbers in the ACC last season.

If Crawford can find greater accuracy from distance, then opposing defenders will be tasked to defend him further from the hoop. The rising junior is a relentless driver of the basketball; an improved long ball will open lanes to the basket. Wake’s point guard doesn’t need to turn into Stephen Curry, but it’d be a big deal if he jumped to Joel Berry-levels of perimeter precision.

“Passes it to the man…and boom goes the dynamite“

Dennis Smith Jr. led the ACC in several assist categories in the 2016-17 season. Crawford was not far behind DSJ’s pace car, though. Crawford ranked second in the conference in assists (5.5 per game) and third in assist rate (32.2 percent). He never had fewer than two assists in a game and posted 10-plus assists in three different games, including Wake’s NCAA Tournament matchup with Kansas State. In total, per Synergy, 37.1 percent of Crawford’s assists led to three-pointers.

For a guy who handles the rock and has a plethora of playmaking duties, Crawford is solid with the ball. Per KenPom, he posted a turnover rate of just 15.7 percent — a big improvement over his freshman season (23.9 percent).