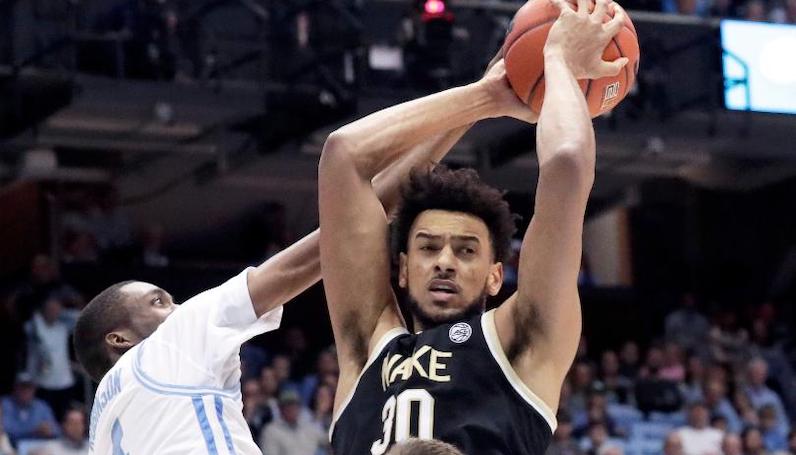 With Steve Forbes now as coach, Wake Forest must be ready to move forward without Olivier Sarr. Early Friday morning, the All-ACC center announced his intention to enter the transfer portal. Sarr plans to find immediate eligibility and play for another program next season. The 7-footer is the fourth Wake player to enter the portal this week, joining Jahcobi Neath, Ody Oguama and Ismael Massoud. (Update: Massoud never officially entered the portal.)

During his breakout junior year, Sarr averaged 13.7 points (53.8 2P%), 9 rebounds and 1.2 blocks per game. After two years of development, Sarr emerged as one of the top players in the ACC — a low-post big with pick-and-pop skills.

He plans to apply for a waiver to play immediately next season. The 7-footer was All-ACC after averaging 13.7 PPG and 9.0 RPG. https://t.co/Qo4YvhnpGx

Prior to his sophomore season, Sarr added nearly 40 pounds to his frame. That served him well — as his interior shooting improved during the 2018-19 season (51 2P%, 49.1 eFG%). However, Sarr’s jump as a player truly took form this year.

As a junior, Sarr posted a monster defensive rebound rate of 25.8 percent this season, which was a top 20 number in Division I basketball.

He’s an efficient low-block scorer (46 FG% on post-ups) and a magnet for contact. On average, Sarr attempted nine free throws and drew 6.6 fouls per 40 minutes (No. 25 nationally).

According to Synergy Sports, Sarr shot 84 percent on basket rolls this season out of Wake’s pick-and-roll action. Sarr is long and mobile, and his skills have improved greatly over the last three years.

During his freshman season, Wake Forest — in some dual-big lineups — would utilize Sarr as a de facto stretch-4 in roll-replace action with Doral Moore.

On occasion, Manning and Wake Forest would even run Sarr off a pindown screen in order to free him up for a catch-and-shoot opportunity.

The potential movement skills were rough, but there was an outline. Sarr shot just 10-of-40 on 3-point attempts across his first two college seasons — nearly 20 percent of his total field goal attempts.

This year, though, Sarr mostly ditched the 3-ball (1-of-7 3PA), and focused on his paint efficiency: 66 percent shooting at the rim with 41 dunks. However, Sarr can still step away and hit a jumper. There’s a little bit of a windup to Sarr’s shot, but with a high release, he can still shoot cleanly over the top of a closeout.

Sarr’s passing numbers — career assist rate of 6 percent — won’t blow anyone away. Obviously. But he absolutely has utility as a short-roll passer out of the pick-and-roll game. It just hasn’t really been accessed much, yet.

Pair Sarr with a ball handler that forces defenses to commit in ball-screen action — and some perimeter shooting — and he has the potential to unlock even more offense.

Here’s Sarr, again, from the upset win over Duke — threading the needle.

The loss is a tough blow for Forbes — specific to next season. Sarr offered the ability to anchor an offense and the team’s defense. Sarr isn’t a prolific rim protector, but he’s long and aggressive: 4.5 percent block rate this season.

At the end of a (rare) road win at Pittsburgh this season, Sarr sent everyone home with a potentially game-saving rejection on Trey McGowens.

(As far as the NBA goes, eventually, I think he can operate as a drop center out of pick-and-roll coverage.)

According to ESPN, Sarr informed Wake Forest earlier this week that he planned to enter the portal; however, the program asked him to hold off until a new coach was hired. After the decision to hire Forbes, Sarr submitted his paperwork.

In his conversation with ESPN, Sarr made some interesting comments on why he chose not to enter the 2020 NBA pre-draft process, too.

What happened was I wanted to test the [NBA draft] waters,” Sarr told ESPN on Thursday night. “I requested the UAC (Undergraduate Advisory Committee). I tried to test the waters, then I had a conversation with Coach and he convinced me to say and get my degree. He had plans for me, I was going to do great things in the ACC, with the team and individually of course. It was late April, Coach was going to stay. Then 24-48 hours before the [draft] deadline, Coach got fired. I didn’t get the chance to put my name in and change my mind.

UPDATE: As Conor O’Neill notes in the Winston-Salem Journal, in a podcast with Les Johns of Demon Deacon Digest, Forbes stated that he and his staff met with Olivier Sarr for two hours over the weekend. Sarr, who hails from France, remains in North Carolina during the COVID-19 pandemic. He’s staying with teammate Blake Buchanan in Durham.