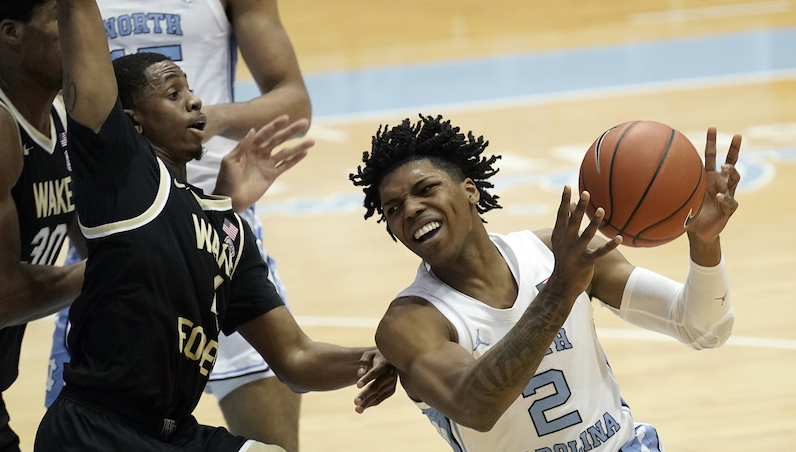 North Carolina guard Caleb Love (2) drives to the basket while Wake Forest guard Daivien Williamson defends during the first half of an... (AP Photo/Gerry Broome

Caleb Love will be back for his sophomore season in Chapel Hill.

One week after North Carolina’s 2020-21 season came to a close, Love announced on Twitter that he will return for the 2021-22 campaign.

Love entered UNC with a great deal of NBA hype; however, he struggled on both ends of the floor this season. There were flashes; Love would intercept a pass and finish with fury in transition. However, a lack of burst and frigid pull-up shoot numbers caused his efficiency to crater. Love shot just 32 percent from the field and 27 percent on his 3-point attempts.

On the defensive end, Love was routinely caught ball-watching in help situations. Love is set to be the highest-rated recruit in the ACC from the 2020 class to return for his sophomore season.

Following Walker Kessler’s decision to transfer out of the program, it’s been an uneasy week for UNC basketball. Love’s return is a bit of stabilizing force, though.

The frontcourt with Armando Bacot and Garrison Brooks is a bit of mystery; however, Roy Williams can be some level of confidence with Love back. North Carolina should have firepower in the backcourt: Love, RJ Davis and Kerwin Walton.