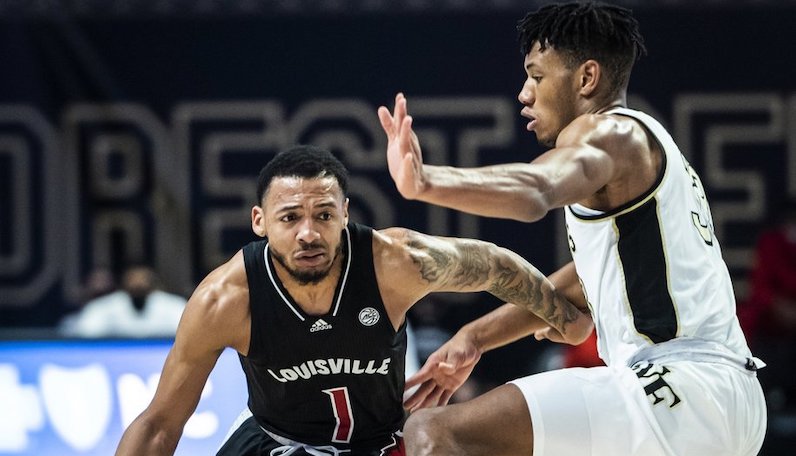 The regular season for college basketball finished up over two months ago, but there’s still constant churn in the NCAA transfer portal. Ody Oguama is the most recent departure from the ACC; after two seasons with Wake Forest, the 6-foot-9 center left Winston-Salem for Cincinnati. Oguama will now play for former UNC Greensboro coach Wes Miller.

While Oguama was recruited to Wake Forest by Danny Manning, he was a more featured player in the 2020-21 under first-year coach Steve Forbes. His usage rate soared from 12.7 percent as a freshman to 20.7 percent. That, too, came as a result of roster turnover.

With Olivier Sarr at Kentucky, the Demon Deacons were left without a true offensive hub. Wake Forest’s half-court offense had to scheme its way to points. The results were mixed; however, the process was mostly good, at least in some games. For this to work, though, Oguama was established as the team’s interior pressure point.

Oguama’s box score numbers don’t jump off the page; he averaged a serviceable 7.6 points (46.5 FG%) and 5.4 rebounds per game. But that tells only part of the story for a useful post player/finisher — one that was starting to make strides in his development.

Oguama doesn’t have greate vertical pop; he recorded a total of just nine dunks during his two seasons with Wake Forest. He counters this with a mixture of strength — carving out space with a low base — and a skillful use of angles.

According to KenPom, Oguama drew 4.5 fouls per 40 minutes during ACC play: No. 10 in the league. Oguama attempted 5.9 free throws per 40 minutes, too.

Obviously, the Demon Deacons were a jump shot-dependent team. Wake Forest finished the season 22nd nationally with a 3-point attempt rate of 46 percent. Ian DuBose was the only other player in Wake Forest’s rotation that drew 4+ fouls per 40 minutes, and he missed 50 percent of the team’s games.

As a team, only 17.4 percent of Wake Forest’s points this season were generated from the free throw line: No. 224 nationally.

Oguama performed his best work, though, as a post-up threat. The sophomore center scored 0.95 points per post-up possession (49 FG%) this season, according to Synergy Sports, which ranked third in the ACC (50+ possessions) behind Matthew Hurt and Justin Champagnie.

Another strength of Oguama was his activity as a screener/dive man in Wake Forest’s spread pick-and-roll or continuity ball screen sets.

When the Deacs were able to generate north-south pressure on the rim, it frequently came with some combination of guards DuBose, Daivien Williamson (solid this season) and Carter Whitt working with Oguama or Ismael Massoud.

Once again, Whitt and Williamson will have their hands on the controls of Wake Forest’s offense — with Forbes pulling the strings. Whitt’s development is one of more intriguing offseason storylines for the ACC. Forbes needs Whitt, who showed flashes, to advance as a playmaker. The sooner the better.

While Oguama worked well as a diver, Massoud (103 3PA) functioned as a spacey pick-and-pop target. Massoud chose to leave the program after the season, too. With Massoud now at Kansas State, Wake Forest will miss his stretch game vs. drop coverage or when teams put two on the ball after a screen.

Massoud’s gravity as a shooter (36.8 3P% career) could also be useful against a switch scheme. When defenders load up to switch, it gives a ball handler like Whitt the opportunity to refuse the screen and get into gaps.

Back for his senior season, Isaiah Mucius is a credible shooter (34.4 3P% over the last two seasons); he can replicate some of Massoud’s 3-point impact. However, Massoud has a quick/high release and serious range on his jumper. That is valuable and will be missed.

Mucius can also help as a mid-post target, though he doesn’t provide the same power as Oguama did as a roller.

The addition of ETSU transfer Damari Monsanto was significant for the Demon Deacons. Monsanto should be able to give Wake Forest’s offense a shot in the arm on the wing — 1.1 points per spot-up possession this season.

In terms of guys who can help the offense as screeners and scoring threats, Forbes will look to Indiana State transfer Jake LaRavia (10-of-31 3PA) and Colorado transfer Dallas Walton (9-of-19 3PA).

Walton is a very good face-up shooter. The numbers don’t lie. The 7-footer shot 48 percent on his long 2-point attempts, according to Bart Torvik’s database, and 71 percent at the rim (11 dunks). There are a lot of different ways Forbes can utilize his stretch-5 skill set, including on the block: 0.85 points per post-up possession.

(Side note: McKinley Wright is so freaking good, man.)

It will be interesting to see, though, which of this group of big men are capable of consistently pressuring the rim off screen-roll.

Shooting a bunch of 3-pointers can lead to a really good offense. Obviously, Forbes wants his team to let it fly from deep, but this season’s 3-point attempt rate was a bit of an outlier his track record as a coach. It seems logical to assume that it will drop some in the 2021-22 campaign. Although if Wake Forest is still battling the same talent disadvantage as this season, then the 3-ball looms as a way to try to level the playing field.

Regardless, the quality of those looks matters a great deal. One of the best ways to create those juicy catch-and-shoot looks comes off the slash-and-kick game in the pick-and-roll. For this to happen, Forbes will need someone new to arise to occasion.