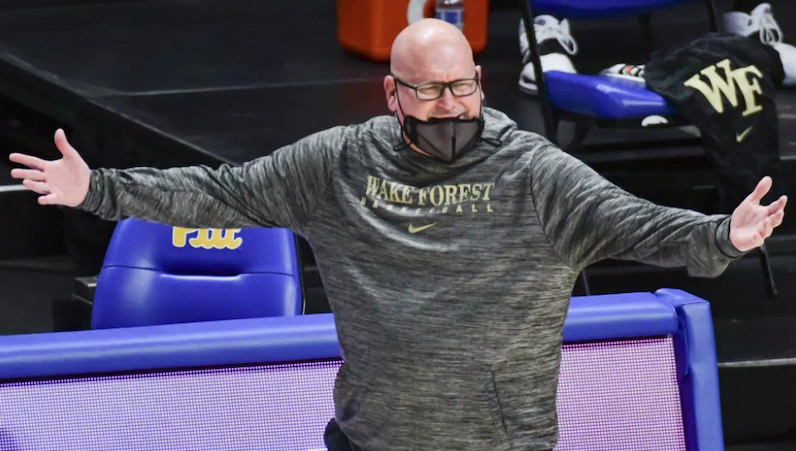 Jake LaRavia is the newest member of the Wake Forest basketball program. After two seasons at Indiana State, LaRavia will transfer to Wake Forest. The 6-foot-9 sophomore was an All-MVC selection this season, while averaging 12.3 points, 6.3 rebounds and 2.3 assists per game.

LaRavia is a skilled big man who offers some stretch and passing to Wake Forest’s frontcourt. That offensive skill set should feature nicely in Steve Forbes’ versatile system.

However, the addition is far from the only bit of roster news this week with Wake Forest. Sophomore guard Jahcobi Neath and freshman center Emmanuel Okpomo first entered the transfer portal.

Two other Wake Forest guards entered the portal, too. Junior wing Isaiah Wilkins, who started his career at Virginia Tech (two seasons), committed to Wake Forest when Danny Manning was still the coach after the 2020-21 season.

Freshman point guard Quadry Adams also entered the portal. Adams, a member of the 2020 recruiting class, initially signed with Wake Forest when Manny was the coach. However, he remained signed when Forbes got the job.

Adams played in only nine games this season — a total of 72 minutes for the former 3-star guard.

Other Wake Forest commitments — forward Jaylon Gibson and guard Marcus Watson — got out of their LOI. Gibson quickly signed with NC State, while Watson headed to Western Illinois. Watson entered the transfer portal this week as well.

Gibson saw mostly spot duty this season for the Wolfpack: 75 minutes, 14 game appearances. Of course, Gibson was stuck behind Manny Bates, DJ Funderburk and Jericole Hellems. A larger role should await him next season — with proper player development.

Because the question came up on *my* board:

As of now, Wake Forest has 9 scholarships in use next season: