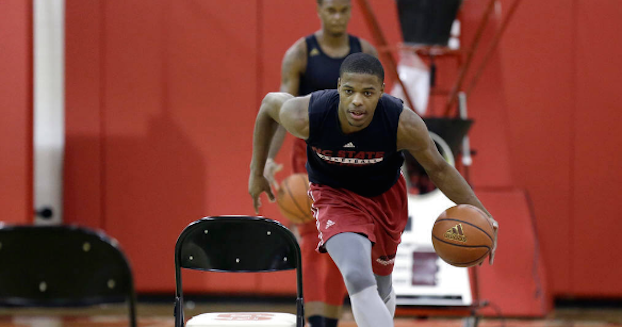 Dennis Smith Jr. is healthy and ready to roll for NC State this season. (AP Photo).

It doesn’t matter which recruiting service you check — Scout, Rivals, 24/7, whatever — you’ll find Dennis Smith Jr. near the top of everyone’s rankings for 2016. If he isn’t the No. 1 point guard recruit on said list, he’s close to it. He’s also, without a doubt, the highest rated freshman point guard entering the ACC this season.

Expectations were already lofty for Smith as he prepped for his freshman season at NC State, and that was before his performance at the adidas Nations a few weeks ago. Smith took flight out west in California, drawing rave reviews and comparisons from SI’s Luke Winn to young Chris Paul — heady praise for a point guard. Smith even had his name floated as a possible choice to go No. 1 overall in the 2017 NBA Draft by a scout.

Smith is a ballyhooed prospect despite not playing a single game of high school ball last season as he recovered from ACL surgery. He’s reportedly at full health now, and has been enrolled at NC State since this January; Smith has already taken 18 credit hours, too. He was able to start developing a report with teammates despite not yet being eligible to play. When Paul was in high school outside of Winston-Salem, he would show up to open gyms at Wake Forest, and play with his soon-to-be teammates. Thanks to this, Paul had chemistry with Justin Gray, Taron Downey and Eric Williams before Midnight Madness his freshman year. The same could be at play in Raleigh with Smith and Abdul-Malik Abu, Maverick Rowan and Terry Henderson.

To read more on how Dennis Smith Jr. will fit at NC State, sign up for basic access to ACCSports.com.