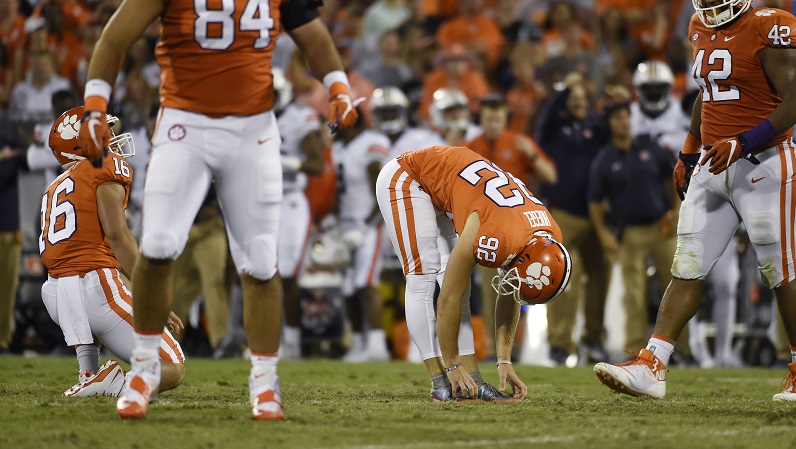 Things have been going so well for Clemson’s football program the past couple of years, it was only a matter of time before the Tigers faced some real adversity.

The adversity reared its ugly head on Sept. 20. Junior place kicker Greg Huegel suffered a freak injury in practice, and was lost for the season. The injury happened on a kick attempt during a drill at the end of Clemson’s daily workout.

“It was a freak accident on the last play of practice on Wednesday,” Clemson head coach Dabo Swinney said in a team release. “We were in the two-minute drill, which we do at the end of every Wednesday practice. A defensive player rolled into him after his kick. He walked off the practice field and we hoped it was just a strain or a bruise, but the tests revealed a torn ACL.”

Huegel took the reins at kicker for Clemson as a redshirt freshman in 2015, and earned second-team All-American honors from Sports Illustrated as a walk-on. He led the nation in field goal conversions, with 27, and set a new Clemson record for points in a season (138). Huegel earned second-team All-ACC honors and was a Lou Groza Award semifinalist in Clemson’s 2016 national championship season. He converted a school record 71 extra points along with 14 field goals. So far this season, Huegel had converted two of four field goals, and 14 of 15 extra point attempts.

Alex Spence, who like Huegel is a fourth-year junior, will get first crack at assuming the starting place kicking role for the Tigers. As a redshirt freshman in 2015, Spence kicked off once against Appalachian State, and converted an extra point against Wofford. That remains Spence’s only career college point heading into Saturday’s home game with Boston College in Death Valley. Last season, Spence kicked off seven times, but didn’t attempt a field goal or extra point. He kicked off twice in Clemson’s victory over Kent State.

Despite the loss of one of the ACC’s more reliable kicking options, Swinney is optimistic that Spence will be able to fill in. He reportedly booted a 51-yard field goal during an August scrimmage in Memorial Stadium.

“It is a big loss. We are talking about a two-time all-conference kicker. But, I have confidence in our kickers,” Swinney said. “Alex Spence will move up. He is in his fourth year with our program and has shown great improvement this year.  He really had a good August camp.”

Clemson has another potential option to replace Huegel at place kicker – walk-on senior Christian Groomes. Groomes booted an extra point in last year’s victory over Syracuse, and had one kickoff each in 2015 and 2016, against Wofford and South Carolina State. As was the case with Spence, Groomes had two kickoffs in the Kent State game. Like Spence, he has never attempted a field goal in a game for the Tigers.

It’s a unique situation for the Tigers to have a pair of veteran kickers in Spence and Groomes, who have each been in the program for several seasons. But they’re so inexperienced as far as kicking field goals, it’s almost like starting new with a freshman or young first-time starter.