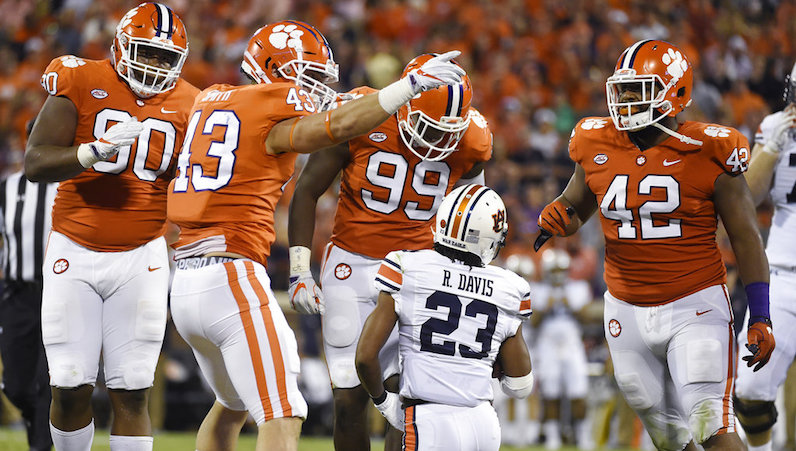 It’s no hidden secret, but Clemson’s defense — led by Dexter Lawrence and Christian Wilkins on the front line — is no joke.

The vast majority of college football programs can’t be contenders every season; even the elites need years to reboot, retool and develop players. Alabama is an exception to this; Ohio State is in this territory, too. Those two programs have the two best coaches in America.

However, it’s not an overstatement to say that Clemson has entered this ground, too. As the team works to replace Deshaun Watson — the greatest player in program history — and several other offensive weapons, like Mike Williams, it’s done something that’s eerily reminiscent of Alabama: leaning on its defense to dominate — transition phases be damned.

At the crest of that seemingly omnipotent defense is Clemson’s defensive line.

Carlos Watkins recorded 13.5 tackles for loss in 2016, which was good for 11th in the ACC; subsequently, the defensive end was selected in the fourth round by the Houston Texans — an NFL franchise that puts on premium on getting to the quarterback.

Without Watkins, though, Clemson’s front four hasn’t missed a beat.

After missing the first half of 2016 with a foot injury, Austin Bryant closed the season strong for Clemson. If the Auburn game is any indication, the junior defensive end is even better. Bryant’s performance against the Tigers — four sacks (tied a school record), seven tackles — earned him ACC Player of the Week honors.

However, the two leaders of this front four are the best set of defensive tackles in college football — Christian Wilkins and Dexter Lawrence.

Wilkins is a monster that can line up anywhere along the front; the 6-foot-4, 300-pound lineman causes havoc from all locations. He’s currently projected as a late first round pick in 2018.

Lawrence is only a sophomore; however, he is already a lock to be a top-five pick in the 2019 NFL Draft.

What’s scary: this line could be even better, too. Former blue chip recruit Richard Yeargin is out for the entire 2017 season after a car accident caused a serious neck injury, back in June. Yeargin is a promising pass rusher that recorded four tackles for loss in 2016.

Through the first two games of the 2017 season, Clemson has yet to give up a touchdown. All nine point scored agains the Tigers have been field goals. Clemson currently ranks fifth nationally in scoring defense.

One of those three field goals came after Ray-Ray McCloud fumble on Clemson’s 11-yard line against Auburn. Auburn moved the ball a total of one net yet, and kicked a short field goal. That’s the best scoring opportunity against Clemson this year, and it didn’t come close to paydirt.

In terms of yards allowed per game, Clemson ranks 22nd in rushing defense (78.5) and is tied for first in pass defense (40.0). In total, the Tigers have allowed just 2.06 yards per play — second best in the nation.

According to Football Study Hall, Clemson’s defensive line has posted a Havoc Rate of 9.6 percent — good for 11th in the nation. Havoc Rate measures the percentage of plays a defense records a tackle for loss, forces a fumble or breaks up a pass. This is an insane number; it’s the highest for any of Clemson’s defensive position groups, and it’s an improvement from the top 10 figure of a season ago.

Dexter Lawrence and Christian Wilkins have combined for three of Clemson’s 20 run stuffs (rushes stopped behind the line of scrimmage), per Football Study Hall. Their presence in the middle of the defense has opened things up for linebackers Kendall Joseph and Dorian O’Daniel, who have been flying around, making plays.

Auburn is a good team, and that was a quality win for Clemson. However, Auburn doesn’t have anyone quite like the team that’s next on Clemson’s schedule: Louisville and Lamar Jackson.

Jackson is playing behind a retooled offensive line in 2017 (an opportunity for Clemson come Saturday night), but he’s put up video game numbers to start the season.

Last season, in one of the best games of 2016, Jackson was electric in somewhat sloppy contest at Death Valley. Despite five turnovers, including three Watson interceptions, Clemson won in a nail-biter.

Jackson, however, ran wild. If you remove yardage he lost from five sacks, Jackson rushed for 184 yards.

Both components of this equation — Clemson’s defensive line and Lamar Jackson — will face their toughest competition of 2017. Clemson has too much on defense to overcome, especially along the defensive ling, but Jackson will certainly make it interesting.

Dexter Lawrence vs. Lamar Jackson: in the words of Cosmo Kramer, Giddy up!.