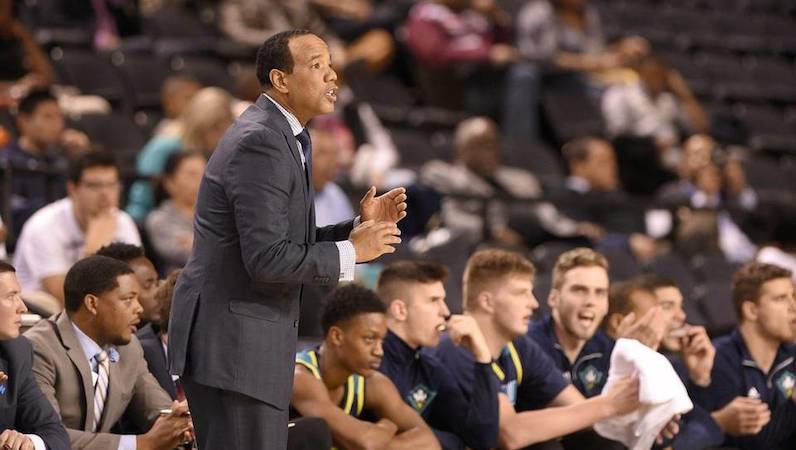 The hiring of Kevin Keatts as NC State’s basketball coach means a new era for the Wolfpack. Keatts, who won 72 percent of his games at UNC Wilmington, arrives in Raleigh fresh off two straight NCAA Tournament appearances. As Mark Gottfried departs, so too will his UCLA high-post offense.

With Keatts comes a new offensive system — one that plays fast and shoots a ton of three-pointers. The last two seasons, the Seahawks won 54 games. They achieved large amounts of this success on the back of a potent offense, which soared to new heights in 2016-17. According to KenPom, Wilmington ranks No. 18 nationally in offensive efficiency: 118.3 points per 100 possessions. The Seahawks scored 90-plus points in 12 games this past season.

Wilmington really started to cook on offense once Keatts got his personnel to the beach. Chris Flemmings transferred in from Barton; JaQuel Richmond came by way of Middle Tennessee State. Denzel Ingram arrived in Wilmington after two season at UNC Charlotte. Three-point sniper Ambrose Mosley is a graduate transfer from Old Dominion. Sophomores Devontae Cacok and C.J. Bryce are sophomores that mark the first recruiting haul for Keatts at the school.

Together, these guys coalesced under Keatts’ supervision to form a dynamic offensive unit. This is what NC State supporters will hope to see in Raleigh.

Under Keatts, Wilmington played a lot of four-around-one offense, spacing the floor and running spread pick-and-rolls with Devontae Cacok. The results speak for themselves; Cacok was a true revelation this season. Of players to run at least 30 pick-and-roll possessions in 2016-17, Cacok ranked No. 1 in the nation in efficiency: 1.68 points per possession on 87.3 percent shooting, per Synergy Sports. Those numbers are comparable to that of Wake Forest’s John Collins, for the sake of comparison.

Shoot the J! Shoot it!

Wilmington provided Cacok with plenty of space to operate in by surrounding the big fella with a plethora of shooting. Nearly 42 percent of Wilmington’s field-goal attempts were of the three-point variety. Four players on the roster, led by Denzel Ingram, attempted more than three three-pointers per game while shooting better than 33 percent. Ingram launched 8.5 triples per game. This crew put up 917 three-pointers this season, which ranks No. 8 in the nation.

The Seahawks, however, used a variety of dribble penetrations to create these looks. Wilmington was not just swinging the ball around the perimeter and chucking as the shot clock wound down.

Here is Wilmington in its opening-round NCAA Tournament game — a five-point loss to Virginia. Following a diagonal down screen from C.J. Bryce, Marcus Bryan and Flemmings set a double high ball screen for Jordon Talley. This came during the midst of Wilmington’s monster 26-11 run to start the game.

Kyle Guy and Marial Shayok of Virginia double Talley off the dual screens — that is a lot of action to navigate through. Isaiah Wilkins chases Bryan on the roll, which leaves Flemmings wide open for a juicy catch-and-shoot three after popping beyond the arc. Running this action from the side also means that there is no natural weak-side help defender to plug gaps.

Keatts wants to get it and go

Despite ranking 67th in the nation in adjusted tempo — 70.2 possessions per game — Wilmington excelled at taking care of the ball: 13.9 percent turnover rate, good for No. 2 nationally. The Seahawks flashed a press on defense that wreaked havoc on opponents; according to KenPom, they forced a turnover rate north of 20 percent, good for another top-70 ranking.

Wilmington knew how to flip turnovers into points, which was a big part of its offense. According to Synergy, Wilmington ranked No. 20 nationally in offensive efficiency in transition: 1.16 points (59.3 percent from the field).

A cause for concern

All of this offensive stuff sounds great, but defense could be a source of concern. As explosive as Wilmington was on offense the last two seasons, the Seahawks had trouble getting stops. Wilmington ranks No. 191 in points allowed per possession, according to KenPom.

Even though the Seahawks forced a lot of turnovers — 504, good for 28th in the nation — Wilmington opponents attempted a lot of threes and shot a super high percentage inside the arc: 54.2 percent. That is one of the worst numbers in the nation and will need to be cleaned up.