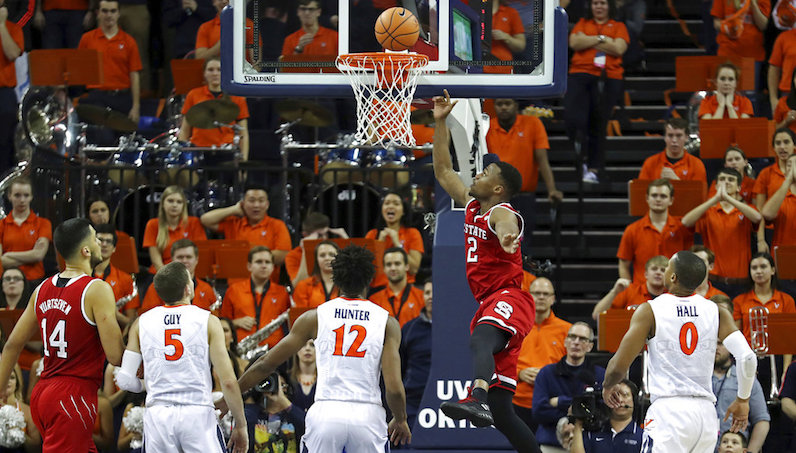 ZACK WAJSGRAS/THE DAILY PROGRESS N.C. State's Torin Dorn (2) shoots a lay up between two Virginia defenders in the second half at John Paul Jones arena on Sunday. Virginia won the game 68-51 to remain undefeated in the ACC.

It took a complete performance, but in NC State’s upset victory over No. 2 Duke, the play of the game came courtesy of Torin Dorn.

NC State’s lead was trimmed to seven after two Marvin Bagley free throws, 87-80; on the ensuing possession, with a little over a minute to play, Dorn caught a pass on the right wing, and lifted to shoot a three-pointer. (Note the screen from Lennard Freeman)

The shot splashed through the net as the whistle blew signaling a foul on Duke’s Javin DeLaurier. And with it came the sound of 20,000 fans losing their collective minds.

Underrated but not under-appreciated

However, Dorn is perfectly happy to space the floor, cut and make plays from either forward position. It must be a tremendous relief for Kevin Keatts, in year one, to know he has a veteran like this to lean on.

Dorn doesn’t fear the ball in late-game situations; that much was obvious in the upset over Duke, and later against Tobacco Road rival Wake Forest.

Fearless at the rim

Dorn rebounds well for his position — according to KenPom, the 6-foot-5 forward has an offensive rebounding rate of 11 percent. He’s also snagged nearly 17 percent of the available defensive rebounds while on the floor, too.

That’s a nice compliment to Dorn’s inside-out game; it allows NC State to roll with him at the 4, and not fear getting grilled on the glass. Dorn has connected on 61 percent of his two-point field goal attempts, which ranks inside the top 200 nationally, per KenPom.

According to Synergy Sports, Dorn is shooting 61 percent on non-post-up field goal attempts at the basket, too. Amongst ACC players with at least 50 possessions, Dorn ranks 18th in efficiency on these types of attempts: 1.26 points per possession. That’s better than Jerome Robinson, Joel Berry and Trevon Duval. It’s also a good compliment to a stretchy big like Yurtseven.

If there’s an area that could use some improvement it’s three-point shooting; however, that may be trending in the right direction. Less than 22 percent of Dorn’s field goal attempts are of the three-point variety; he’s just 12-of-38 (31.6 percent) from downtown this season. Dorn has been pretty good off the catch, though: 14-of-39, scoring 41 points. That’s pretty good.

Keatts and the Wolfpack will need more of this from Dorn. Three of NC State’s next four games come against teams currently in the top 30 of KenPom’s efficiency ratings.

The Art of Thievery: Is Lavar Batts the ACC’s next great steals artist?