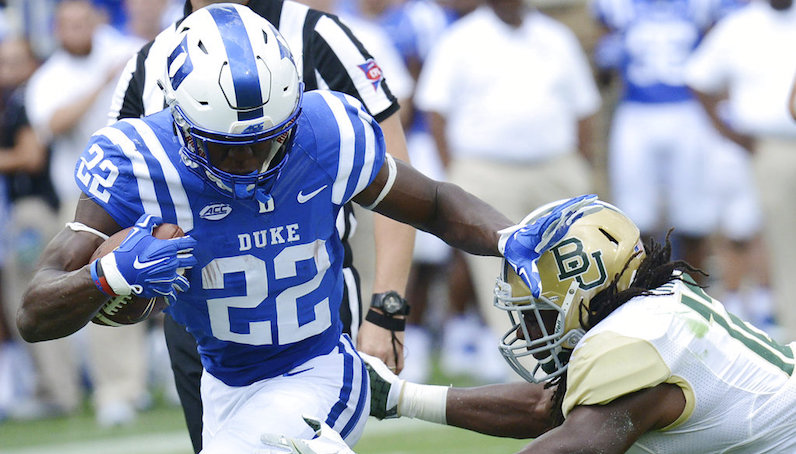 On the way to a 3-0 start, Duke football has looked sharp in a variety of departments. Daniel Jones has looked sharp slinging the ball around to T.J. Rahming. Despite losing talented defenders, like Deondre Singleton and DeVon Edwards, the Duke has stopped the run, gotten after the quarterback and remained opportunistic.

Another serious boon for this team, though: balanced run game with two talented tailbacks — Shaun Wilson and Brittain Brown.

The backfield pairing of Shaun Wilson and Brittain Brown has given Duke everything it needs so far this season. Brown has 42 carries; Wilson has 41 carries. The Blue Devils are the only ACC team to have two players with 40-plus carries.

Wilson, the elder statesman of Duke’s running backs, is one of just five FBS players to have at least 40 carries, four rushing touchdowns and average better than seven yards per carry.

One (or more) steps further

David Cutcliffe said this week that he’d like to see his team’s run game improve, but so far Duke’s offensive line has done well blocking for Brown and Wilson.

According to Football Study Hall, Wilson and Brown have Opportunity Rates of 48.8 percent and 38.1 percent, respectively. This means on nearly half of Wilson’s carries, the line has been able to create at least five yards of running room. It takes more than that, though, too averaged 7.3 yards per carry.

It’s early, but that’s a significant improvement for Wilson over his output in 2016. Florida State’s Dalvin Cook, the ACC’s premier home run-hitting back last season, averaged 6.9 Highlight Yards per Opportunity.

Brown and Wilson are tied for No. 1 in the ACC with three carries each of at least 20 yards, according to cfbstats.com.

A third dimension, too

For Duke football, Shaun Wilson and Brittain Brown aren’t the only two players invited to this party, though. Quarterback Daniel Jones has flashed some terrific utility as a runner, too.

In the win over Northwestern, Jones looked terrific running some zone read action; he ran through and over the Wildcats on defense to the tune of 108 yards and two touchdowns. It was the first time a Duke quarterback has run for over 100 yards in a game since Thomas Sirk in the 2015 Pinstripe Bowl. It was also just the fourth time a Duke QB has hit that benchmark since the 2000 season.

He isn’t Lamar Jackson, but if you add yardage lost from sacks back into his totals, the running line put up by Jones isn’t too shabby. Per Football Study Hall: on non-sack carries, Jones has averaged 6.3 yards, and has three touchdowns.

Up next for Duke Football: The Victory Bell

Duke football travels to Chapel Hill this weekend for a pivotal matchup with North Carolina. The Tar Heels certainly aren’t without talent on defense; in fact, UNC has some serious playmakers on that side of the ball. However, through injuries and other issues, the Heels simply haven’t put it together defensively.

The linebackers haven’t made enough plays for UNC, either. According to Football Study Hall, North Carolina’s linebackers rank 112th nationally with a Havoc Rate of 1.2 percent. The Tar Heels have allowed opponents to combined for an Opportunity Rate of 36.8 percent. That’s actually an improvement over the last two seasons; however, it still ranks outside of the top 65 nationally.

Duke football will want to get its run game going on offense, which can open up lanes for Daniel Jones against a defense that’s also struggled with the pass. If that happens, Duke can let its defense go to work against a banged up and inexperienced offense.