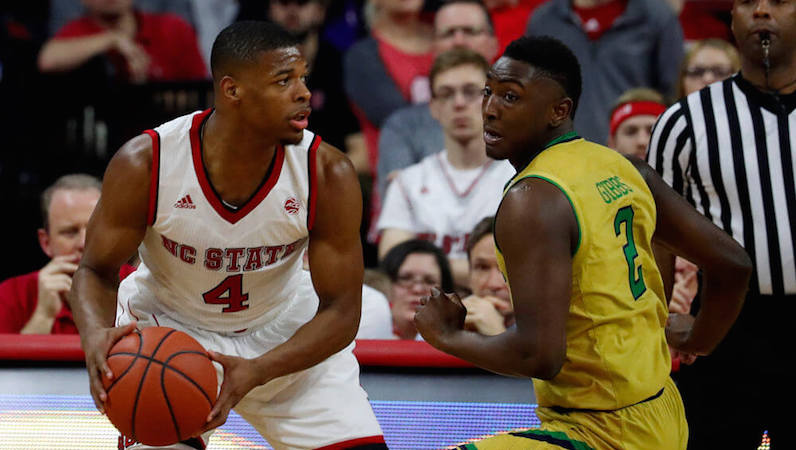 Now a sophomore, Temple Gibbs will have to take on more responsibilities in Notre Dame's backcourt. (AP Photo)

It may not be this season, but soon enough, Temple Gibbs will be a star at Notre Dame.

Mike Brey has created one of the top programs in college basketball; not only in terms of success, but also in terms of player development. Bonzie Colson and Matt Farrell — the best pick-and-roll combination in college hoops — are two shining examples of this. It’s become routine, every season, to expect at least one Notre Dame cager to make a leap.

Rex Pflueger will look to breakout this season, too, but Temple Gibbs oozes with high-level potential for the Fighting Irish.

Temple Gibbs appeared in all 36 games for Notre Dame in 2016-17; he even made one start, which in a win over Florida State. However, in Mike Brey’s razor-thin rotation — Gibbs was one of only six players to play 500-plus minutes — opportunities were sparse. That changes now, though.

V.J. Beachem and Steve Vasturia, two of the steadiest hands in college basketball the last four years, are gone. Their eligibility is exhausted; Gibbs, however, is just getting started.

According to Sports Reference, Gibbs was one of only five freshmen in the ACC last season to play at least 500 minutes, make 10-plus three-pointers and have an assist rate over 18 percent. The other four players include Dennis Smith Jr. — a top-10 pick and Rookie of the Year candidate — are two of the league’s top guards: Ky Bowman and Bruce Brown.

Gibbs can run the show, too

The basketball will usually be in Farrell’s hands, which is a good thing. He’s a very good basketball player. Temple Gibbs can play off the ball, though. According to Synergy Sports, Gibbs scored 0.93 points per spot-up possession as a freshman; that ranked 50th in the ACC amongst players with at least 70 possessions.

Mike Brey’s mover-blocker offense is a fantastic vehicle for secondary creators, like Gibbs.

Gibbs didn’t run that many pick-and-roll last season, but when he did, the rookie was efficient, especially as a passer. Notre Dame shot 61.5 percent and scored 1.4 points per possession when Gibbs was a passer out of pick-and-roll action.

According to Synergy, there were 73 ACC players in 2016-17 that recorded at least 20 possessions as a passer in a pick-and-roll. Of that group, Gibbs ninth in offensive efficiency on said possessions.

The call them free for a reason

According to KenPom, Notre Dame led the nation in free throw percentage in 2016-17 — 80 percent. It’s part of what made the Irish the 18th most efficient offense in the nation last season: 118.1 points per 100 possessions. Again, Gibbs contributed to this cause, too.

Gibbs — who drew a shooting foul on 15.3 percent of his spot-up possessions, per Synergy — shot 83.1 percent from the charity stripe.

By the way, Gibbs was one of 19 ACC players last season to shoot 80 percent or better on foul shots — minimum of 50 attempts.

Dating back to the 1992-93 season, Gibbs is one of only 40 ACC freshmen players to shot 80 percent or better on free throws with a minimum of 50 attempts. Some of the other ACC players to accomplish this includes Chris Paul, Jayson Tatum, Wayne Ellington and Marvin Williams.

Voice of the Irish Don Criqui on The David Glenn Show