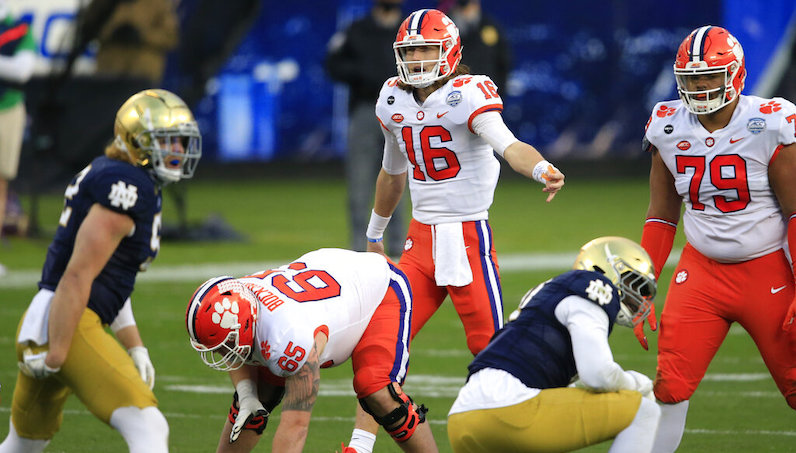 With realignment rumors swirling and conferences shifting, it’s important to understand the outsized importance of Notre Dame. This is one of the premier athletic departments in the country: a massive fan base, strong brand recognition and widespread television interest. Like or dislike Notre Dame, there’s a good chance people will tune in to watch them succeed or fail.

Notre Dame checks all the boxes. This is a wildly popular program — in the eyes of old, wealthy people; young recruits and, obviously, television executives. Notre Dame is a goldmine, which has little to do with the color of the helmets, although that’s certainly part of its brand, too.

Add it up, Notre Dame wields a considerable amount of leverage over the ACC, its part-time partner for nearly a decade that’s now under existential threat. The Big Ten looms as a dangerous potential poacher. The league is flushed with cash and plenty of natural rivals for Notre Dame. (Also: blah, blah, blah, academics. Blah, blah, blah.)

As much as Notre Dame covets its Independent status is football, it will, at some point, need to join a conference. That’s the reality: the money is just too good. When that time comes, though, it will of course not mark Notre Dame’s first foray into a conference schedule. In fact, not too long ago — in a time of need — Notre Dame found shelter and success within the confines of the ACC.

Now, looking back, it’s worth wondering: was that the sign of things to come or a missed opportunity for a league that’s fighting for its existence.

After a decade of partial membership, former commissioner John Swofford and the ACC had a chance to put Notre Dame in a tough spot ahead of the 2020 season. As the sport stumbled awkwardly and dangerously towards the start of the 2020 season — in the middle of a global pandemic — many leagues adopted new scheduling models. For the ACC, this meant a “10 + 1” operation: 10 conference games — five home, five away — and one non-conference game.

Notre Dame loves to flaunt its Independent status; however, this approach temporarily left the Irish (and NBC) without a home for the 2020 season. That’s a lot media content just floating in the ether, plus a trip to the CFP at stake. Simply put: a great deal of money was in jeopardy.

The ACC, Notre Dame’s partner, arrived and offered temporary membership for the football program: one year, no strings attached. Notre Dame did, however, share home game rights on NBC with the rest of the ACC.

In the only season of conference play in its storied history, Notre Dame went 10-0 in the regular season and made it to the ACC Championship game. Clemson curb-stomped Notre Dame in the title game, 34-10, behind a superb performance from quarterback Trevor Lawrence. However, Notre Dame got to play a full schedule and a second postseason game — losing to Alabama in the 2020 Rose Bowl.

After that, things returned to normal; Notre Dame continues to play five ACC opponents in each season as non-conference foes.

Currently, Notre Dame is tied to the league: the university is unable to join another conference in football while also having its other Division I programs remain in the ACC. So, in order to join another league in football, Notre Dame would first need to fully exit the ACC. The line feels awfully flimsy at the moment, but for now: the two parties are tethered together.

In theory, the ACC could’ve held Notre Dame’s feet to the flames, attaching strings to the one-year football arraignment. The ACC could’ve tried to force a potential deal out of Notre Dame: join the league in 2020 for football, and then join as a full member by some future date. Or, heck, to join in 2020 could’ve required full-time membership, effective immediately.

Alas, that didn’t happen. Swofford didn’t play hardball. Perhaps it wasn’t feasible. Perhaps it was an optics issue. The timing was bad, given the state of the pandemic; everything was in flux, including college sports and higher education.

As the ACC desperately looks for ways to add value to its portfolio — thus creating more bargaining power inside structures like ESPN and the CFP — landing Notre Dame is the best-case scenario. However, that’s an uphill battle given the financial advantages of the Big Ten, hypothetically. Plus, Notre Dame has leverage and time on its side; the Irish can wait it out and find the exact opportunity it wants. If the ACC is to retain Notre Dame, it may need to sweeten the pot in unprecedented fashion.

The Haves and The Have Nots

Last week, Spencer Hall of Channel 6 joined Pablo Torre on The ESPN Daily podcast. The two discussed the current mania of college football, including a segment devoted to the outsized importance of Notre Dame.

When Torre asked Hall what Notre Dame should do, Hall was clear: remain patient and “look for the weakest possible high-value conference to enter.” This, as Hall notes is where the ACC could come in: offer Notre Dame full-time membership, including football, with favorable terms and a disproportionate amount of the money.

Hall continued the hypothetical, as if he were a Notre Dame stakeholder: “As an interested agent for Notre Dame, I would inflict unfair terms on everyone around me because ‘I’m worth more to you than you are to me.'” Once again, this showcases the incredible leverage of Notre Dame.

During the 2020-21 fiscal year, the ACC generated around $578 million, which is a conference record. It was an increase of $80 million from the year prior, which of course saw its basketball season canceled due to the advent of the COVID-19 pandemic.

Each ACC school received an average payment of $36.1 million, according to the conference. For Notre Dame, which was a member of the league for the 2020 football season, this resulted in an equal share payment of $34,889,808.

That’s a big increase from the year prior, unsurprisingly. In the 2019-20 fiscal year, Notre Dame received a payout from the ACC of $10.8 million. Of course, Notre Dame didn’t participate as a football member during the 2019 season, hence the difference.

Working along the lines of Hall’s hypothetical: If Notre Dame were to negotiate a new deal with the ACC, the school could demand a larger cut of the league’s revenue. Instead of the pie being divided evenly into 15 slices, Notre Dame would receive the largest piece.

It’s not difficult to see how certain ACC schools would take issue with this type of agreement, especially a school like Clemson, another football powerhouse that’s fighting against for supremacy in the sport. From Clemson’s perspective, that money is meaningful in the arms race that is the top of the college football food chain.

Plus, the optics could matter from a couple different points of view: administrative, coaching and recruiting. It seems unlikely that the Tigers would enjoy seeing the Irish enter their own league, something they’ve been with and built for 70 years, and instantly receive preferable treatment.

However, with each current full-time tied to the league due to its powerful Grant of Rights deal, there may not be much of a choice.

It’s disconcerting to have this many unknowns, with insane amounts of money floating around. Like it or not, though, this is the current state of major college athletics.

Read More on Notre Dame and The ACC

Look Ahead: ND Football schedule through the 2037 season