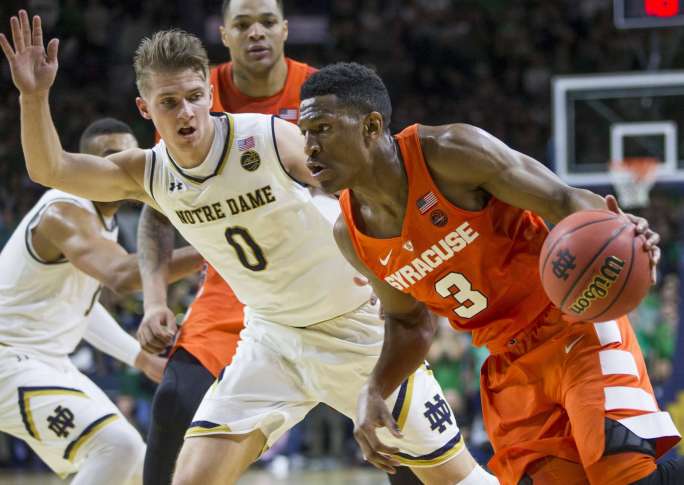 Notre Dame is one of the healthiest basketball programs in the country, and one of its serious competitive advantages is the ability to develop players. There are two stellar examples of this on the current roster: Matt Farrell and Bonzie Colson, who have evolved to form a dynamic one-two combination.

Colson is now one of the best players in America. Somehow, year after year, Mike Brey and his staff find ways to take players and work them into Notre Dame’s efficient spread offense.

Things will look different in South Bend next year, though. Colson and Farrell will be back, but longtime snipers Steve Vasturia and V.J. Beachem are out. The Fighting Irish will once again have to rely on player development to replace that shooting punch. For Notre Dame fans, Rex Pflueger — one of the best names in college basketball — is here for you.

Pflueger is no newbie to Notre Dame’s rotation; he’s appeared in 65 games over his first two seasons at Notre Dame. In 2016-17, he played in 35 games and started 11 of Notre Dame’s final 12 contests. Plenty of those minutes were of the high-leverage variety.

However, despite playing in over half of the team’s available minutes (51.9 percent), Pflueger was counted on primarily as a defender and ball-mover on offense — space the floor, screen and swing the ball. Pflueger, who was the only starter to not average double-digit points, posted a usage rate of only 11.9 percent. That’s a well below-average number and highlights how little he was used in Notre Dame’s spotless offense. Less than 12 percent of the team’s possessions ended with a Pflueger shot, turnover or drawn foul. That will change this season, though. In fact, I wouldn’t be surprised to see that number double.

The ace of space

Notre Dame’s derivative of the mover-blocker offense is excellent for getting wing players in space on the perimeter; it creates catch-and-shoot opportunities for guys coming off pindowns and flare screens.

That type of action does more than produce open jumpers; it also clears natural help defenders out of the middle of the floor — thus creating a cleaner surface for pick-and-rolls. As good as Colson and Farrell are (and they are really good), they need the spacing and shooting gravity provided by the team’s wings to achieve full spread screen-and-roll nirvana.

Notre Dame scored 0.98 points per possession on pick-and-rolls when Matt Farrell was the primary operator and either shot or passed the ball, per Synergy Sports. Colson connected on 54 percent of his field-goal attempts when he was a roller.

It looked as though rising junior Matt Ryan (43.4 3FG%) would be poised to be the team’s top spacing agent in 2017-18; however, Ryan decided to transfer to Vanderbilt in April. This is why Pfluerger will be so important to the team’s offense next season. Temple Gibbs looks like a serious player, and incoming freshman D.J. Harvey enters with lofty praise, but Pflueger’s shooting will be vital in keeping the beautiful machine humming.

More than half of Pflueger’s field-goal attempts — 51.1 percent — were of the three-point variety in 2017. He connected on 39.7 percent of his threes on nearly two attempts per game. According to Synergy, Pflueger scored 1.11 points per possession and shot 40.8 percent on jump shots last season. He ranked 16th in the ACC in offensive efficiency on jump-shot possession in 2016-17.

Notre Dame will be in great shape if it can get that type of production once again from Pflueger on a much broader usage rate.