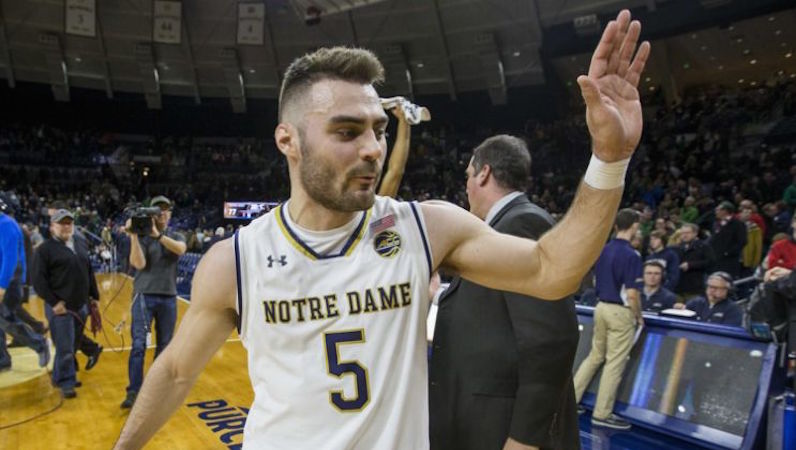 The Fighting Irish roared back from a 21-point deficit to advance in the ACC Tournament. (AP Photo)

For the last few of seasons, as Mike Brey has lifted Notre Dame to tremendous heights in the ACC, the Fighting Irish have featured a ball-dominant guard who can shoot and run spread pick-and-roll action in the team’s dizzying mover-blocker offense. In years past, this was Jerian Grant — now with the Chicago Bulls — or Demetrius Jackson; both of those guys earn money playing basketball now.

Brey then gave the keys to the offense to unproven junior Matt Farrell, who played just 436 minutes his first two seasons in South Bend. It is hard to imagine Brey forecasting a better return than he has gotten from Farrell, who has played his way into becoming one of the ACC’s best point guards.

What was once an uncertainty in the preseason has morphed into a strength for Notre Dame’s shiny spread offense.

Farrell has started every game for Notre Dame this season, and his 34.3 minutes per game are a team-high. He has provided the Irish with a necessary fourth double-digit scorer (14.2 PPG) and ripped nets at a ridiculous clip from beyond the arc — 43.3 percent on three-pointers. Farrell has 17 games this season of at least two made three-pointers on better than 40 percent shooting from long range. That is ridiculous.

According to Synergy Sports, Farrell ranks seventh in the ACC (50 or more possessions) with 1.22 points per possession on spot-ups — on 47 percent shooting. Isolating specifically for catch-and-shoots, Farrell has connected on nearly 41 percent of his attempts. Notre Dame loves running its perimeter snipers off of flare screens, which is an excellent action to get these tasty catch-and-shoot looks, especially from beyond the arc.

The junior can be a little loose with the basketball; according to KenPom.com, he has a turnover rate of 19.3 percent. However, that has yet to really throw off Notre Dame’s efficient offense; in fact, the Irish rank third nationally in turnover rate — 14.3 percent, which is even an improvement over a season ago (15.3 percent).

Notre Dame also needs Farrell to be aggressive. He has to look for his own shot and create for others. Guys like V.J. Beachem and Steve Vasturia count on that. Farrell does not have the same quicks as Jackson, his predecessor, and the Irish have also dealt with the departure of Zach Auguste — the team’s former rim-running maven. Brey has a ton of great shooters at his disposal, but it can be tricky to get north-south on offense without a big-man screener-type who can suck gravity to the middle of the court. All of the ball reversals are nice and look pretty, but sometimes that does little in terms of bending a defense.

Luckily for Notre Dame, Bonzie Colson has emerged as a potent roller, and Farrell is clever at knifing through a defense. On pick-and-rolls, Notre Dame scores 1.01 points per possession when Farrell passes, according to Synergy. That number perks up when he passes to a roller: 1.22 points per possession on 61 percent shooting. Not too shabby.

There are several ways to build a sustainably good Division I basketball program, and Notre Dame has struck gold as one of the best player-development programs in the nation. This is something that occurs year after year at the Joyce Center: players enter Notre Dame and work their ways to becoming stars. Two seasons ago, Farrell and Colson rarely played; now they are the centerpieces on a Notre Dame squad that has the ability to make a tournament run. Two years from now, we will probably say similar things about Temple Gibbs.

First things first, though: Farrell and Notre Dame will focus on the now. After some midseason doldrums, the Irish have won four straight, and with three winnable games left in the regular season, including two at home, this team could play its way into a coveted double-bye in Brooklyn.