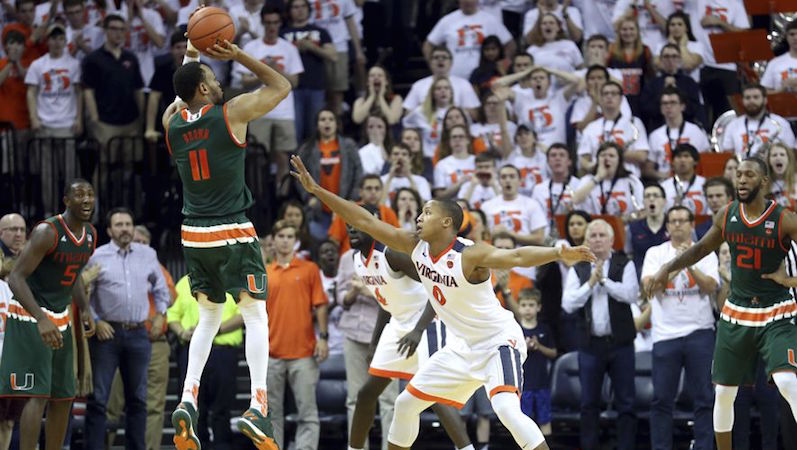 We are taking an in-depth look at some of the best point guards in the ACC. Earlier this week, we made the case for Wake Forest’s Bryant Crawford. Today, we’re focusing on a rising sophomore who earned a serious rep for himself this season in Coral Gables.

It was a big deal for Miami basketball when Bruce Brown decided to not enter the NBA Draft, returning for his sophomore season. Brown was one of the best guards and freshmen in the ACC in 2016-17.

Ja’Quan Newton functioned as Miami’s point guard this season; however, the Philly native posted a turnover of 20 percent, which has caused some to speculate on if he will move off the ball more. If that’s the case, Brown would be in line to operate even more as the lead guard for a team that’s on the rise. Here’s why:

Miami’s offense is a pain to defend because of the high volume of ball screens. To stop the Hurricanes, a defense has to be locked in for the entire shot clock and capable of navigating the potentially murky waters of ball-screen action. Miami ranked No. 325 in Division I in average possession length — 19.3 seconds — according to KenPom.com.

Brown, in his freshman season, flashed some serious skills playmaking out of the pick-and-roll. According to Synergy Sports, Miami scored 0.9 points per possession and scored 42 percent of the time when Brown ran a pick-and-roll.

Brown could look to distribute and get his teammates involved; he could also load up, get to the rim and finish amid traffic.

When Brown was on the floor this season, he assisted on nearly 21 percent of his teammates’ made field goals. That’s a rate congruent with several other lead ACC guards, like Joel Berry, Ky Bowman and Grayson Allen. His assist rate made a small jump in league play, too: according to KenPom, Brown assisted on 21.7 percent of the made field goals while on the court.

UPS isn’t the only Brown that can go fast

Few players are better in transition than Brown. The freshman was especially dangerous when he was the one pulling the strings on the break. According to Synergy Sports, Brown scored 1.18 points per possession when he was the ball-handler in transition, which ranks No. 4 in the ACC — just behind Dennis Smith Jr. Brown shot 68 percent from the floor on those possessions, which is good for second place in the conference.

Not only can Brown run a mean pick-and-roll and power a fast break, but he’s a legit two-way menace — one of the best in the ACC. Brown has elite size for the point guard position, and he knows how to put his 6-5 frame to work on defense. He reportedly has a 6-9 wingspan and is active when it comes to contesting shots.

Per KenPom, Brown ranked seventh in the ACC during league play in terms of steal rate. Nearly three percent of oppositional possessions ended with Brown stealing the ball. As a team, Miami was pesky defensively and ranked No. 66 nationally in steal rate.

Look at how much ground Brown covers to block this Justin Jackson three-pointer. This is a big-time play. Brown isn’t rejecting the 5-11 dude that lit up your pick-up team at the YMCA last week; Jackson is a lottery-bound wing with a 6-11 wingspan.