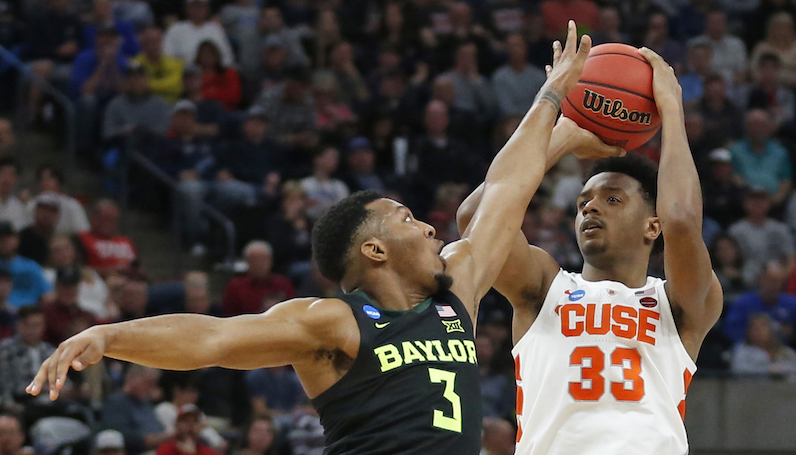 For Syracuse Basketball this offseason, turnover is high — to put it mildly. In the summer of 2019, the program will part ways with several program fixtures from the last 2-3 seasons: Tyus Battle, Oshae Brissett, Frank Howard and Paschal Chukwu.

As a baseline, Syracuse will be stout defensively. Say what you will about the 2-3 zone (it’s not my cup of tea), but it usually carries from year-to-year, and it raises the program’s overall floor. Over the last 20 seasons, Syracuse has on only two occasions landed outside the top 50 in adjusted defensive efficiency, per KenPom.

With an eye on those returning to the Dome for next season, let’s focus on four impact players who need to perform for Syracuse.

During his first season in uniform for Syracuse, Hughes had a rather impactful season. He started every game, finished fourth on the roster in usage rate (20.6 percent) and second in scoring (13.7 points per game).

The ECU transfer knew his role: let it fly from deep. On a roster that was mostly strapped for volume/efficient range shooting, Hughes got up 235 3-point attempts (37 3P%): 64 percent of his field goal attempts came from beyond the arc. He was one of six ACC player to attempt at least 230 3-pointers last season.

Hughes finished the season with a true shooting rate of 56.5 percent, which is solid. According to Synergy Sports, Hughes scored 202 points on spot-up possessions last season — third most in the ACC: 1.04 points per possession (53 eFG%). Over 78 percent of his 3-pointers were assisted on.

Without Howard, Battle and Brissett to spot-up around, though, Hughes may have to create more for himself next season. That could make things tricky, though Hughes — on a small sample — scored 1.09 points per possession out of the pick-and-roll, per Synergy.

On the defensive end of the floor, Hughes — from the confines of Syracuse’s zone — emerged as a blocks/steal guy, too. Hughes was one of eight ACC players to finish with a three percent block rate and a two percent steal rate. He was joined on that list by Zion Williamson, and teammates Chukwu and Dolezaj.

It’s never easy being the coach’s kid, right? Now imagine having to play that role in front of millions of television viewers and opposing crowds dead-set on making your Tuesday night insufferable. Well, Buddy Boeheim walked that road, and his pace improved as his freshman season went along.

Through the first two months of his college career, Boeheim played in just 11 non-conference games (12.9 minutes per game). In that span of time, the numbers weren’t super encouraging, either: four points per game on 25.5 percent shooting (22.2 3P%).

Next year, even more will be expected of the Boeheim; however, if Syracuse can find someone to work as a slash-and-kick facilitator, the Orange could work as a solid perimeter shooting team with Hughes, Boeheim and incoming freshman Joe Girard. Boeheim finished his freshman season with 108 half-court catch-and-shoot attempts, according to Synergy (52.3 eFG%).

Dolezaj is one of the sneaky impactful two-way players in the ACC. He’s now appeared in 71 games — with a career true shooting rate just under 60 percent. On the other end of the floor — from the baseline of the zone — Dolezaj has a block rate of 3.4 percent and a steal rate of 2.5 percent in the run of play. Those are all solid numbers.

A product of Slovakia, as a sophomore Dolezaj averaged 2.3 steals and 0.9 blocks per 40 minutes. Again, playing in the zone helps inflate those numbers some, but it’s still nice to see the overall impact.

The 6-foot-10 Dolezaj offers pretty solid shooting from all 3-4 levels of the half court. According to Bart Torvik’s data, the rising junior shot 73.2 percent at the rim, 47.8 percent on 2-point attempts away from the basket and 38 percent on 3-pointers.

A key for Dolezaj will be his health. It’s great that he has the gumption to stand in and take a charge from Zion Williamson, but is it wise? (At 180 pounds, no, it’s not.)

If Dolezaj can gain weight — something that he desperately needs — and manages to stay healthy, he has the ability to make up for some of the lost two-way production of Brissett.

Carey, a 4-star guard in the 2018 class, entered the ACC with a great deal of promise and potential. While dealing with numerous injuries, though, Carey’s freshman season never quite got off the ground. He played in 25 games, making two starts. However, he struggled on offense.

The low point for Carey likely came back in January when Duke’s Tre Jones — before suffering a shoulder injury — ripped Carey multiple times at the start of the game.

Hopefully, though, with a clean bill of health and a year of experience the game will slow down as Carey’s able to speed up. There’s clearly a lot of untapped ability here.

Markell Johnson to return for his senior season at NC State