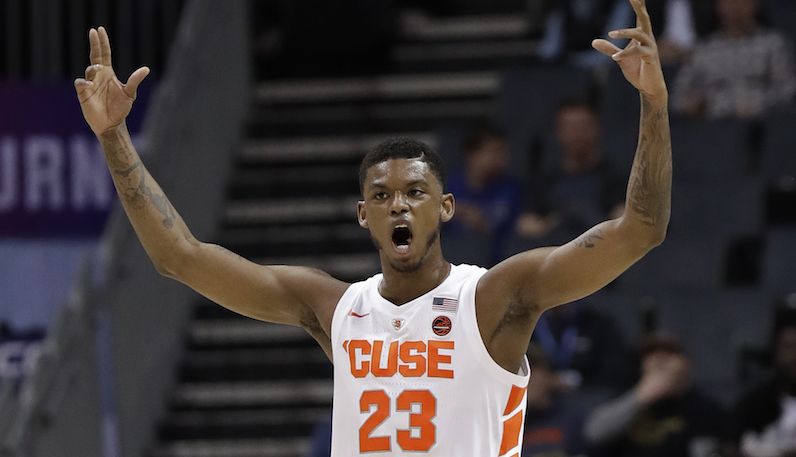 Syracuse's Frank Howard (23) reacts after a basket against Pittsburgh during the first half of an NCAA college basketball game in the Atlantic Coast Conference tournament in Charlotte, N.C., Wednesday, March 13, 2019. (AP Photo/Chuck Burton)

According to a statement from Syracuse Basketball, starting senior guard Frank Howard — due to a violation of athletic department policy — will be out for an indefinite period of time. He won’t play in tomorrow’s NCAA Tournament opener against Baylor.

Syracuse announces starting point guard Frank Howard won’t play in the NCAA Tournament "for an indefinite period of time due to a violation of athletic department policy." HUGE blow to the Orange.

The big 6-foot-5 point guard has played in 131 career games at Syracuse; this season, he’s started 28 of 29 games and averages 8.9 points per game.

Howard isn’t a wildly efficient offensive player (96.2 offensive rating); however, he’s one of their few sources of range shooting (33.8 3P%). Atop the 2-3 zone, he gives Syracuse some length, too. For his career, he’s averaged 2.2 steals per 40 minutes.

While in Charlotte at the ACC Tournament, Howard played well: 23 points per game (50 3P%). He also became the center of attention during the loss to Duke when it appeared as it he tried to trip Zion Williamson.

Boeheim dodges question on whether Frank Howard might be eligible to play if SU advances. He won’t play tomorrow

Know Your Dance Partner: Can Syracuse keep Baylor off the offensive glass?