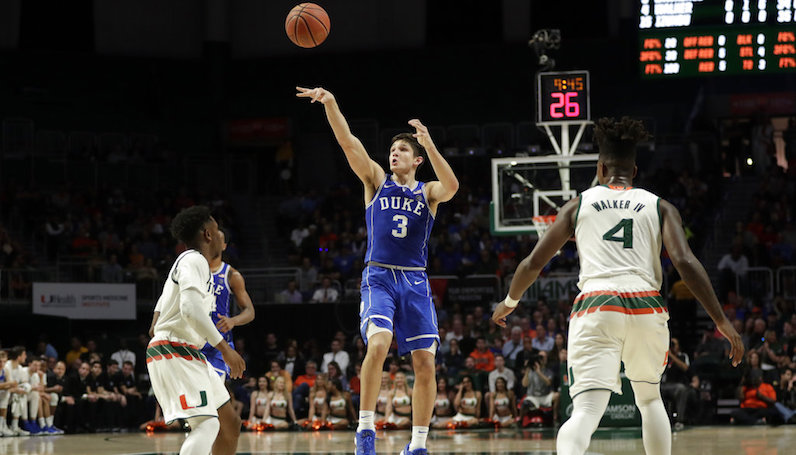 Grayson Allen is in the midst of an outstanding senior season, and that goes beyond the box score. Finally healthy, and out of ESPN’s glaring media cycle, Allen appears to be having fun again on the basketball court. However, Duke’s lone senior is off to the opposite of a smooth start in conference play.

Here’s a look at how Allen’s shooting splits breakdown between ACC games and out-of-conference contests. The sample size is small, but the slippage is notable.

It’s worth pointing out, too: Grayson Allen hasn’t let the shooting slump impact his overall play. His turnover rate and assist rate have basically remained flat; the floor game hasn’t changed. In the win over Wake Forest, Allen went 0-of-5 from the field, but almost put together a double-double: 12 rebounds, eight assists. The performance was a bit of an oddity, too. According to Sports Reference, that’s one of just 12 times this season a player has scored five or fewer points, collected 10 rebounds and five assists.

So: Should the Blue Devils be concerned with Grayson Allen?

Look, obviously, it would be better for Allen to make some more shots; his perimeter shooting is critical to this team’s half-court offense, although Gary Trent and Trevon Duval are trending in the right direction. (Trent has been terrific recently, which is a tremendous boon to Duke.)

However, there’s over 100 games of data that points to Grayson Allen being a great shooter, from all levels of the floor. According to Synergy Sports, Allen is a career 43.6 percent shooter on spot-up possessions — scoring 1.19 points per possession.

Duke’s motion offense has produced terrific looks for perimeter players for four decades now. That’s not about to change. Plus, he gets to play off the gravity of Marvin Bagley and Wendell Carter. Teams will never be able to load up on him, and it’s only a matter of time before he heats up.

This weekend’s opponent — Pittsburgh — may be just what the doctor ordered, too. The Panthers rank No. 161 in defensive efficiency, per KenPom; in league games, they have allowed nearly 114 points per 100 possessions. Pitt ranks 337th nationally in transition defense: 57.2 percent shooting, 1.15 points per possession, according to Synergy. Allen could look to get some easy buckets on the break.

Get Moving: What missing element does Gary Trent provide to Duke’s offense?