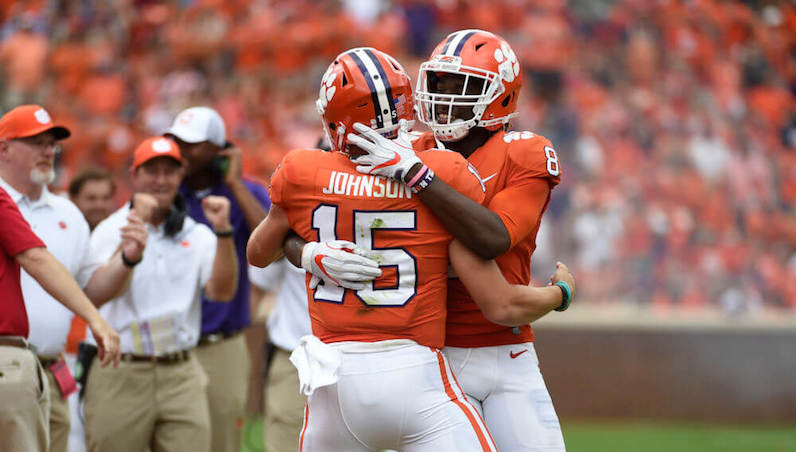 According to a report from Larry Williams of Tiger Illustrated, backup quarterback Hunter Johnson will transfer from Clemson. Additional sources have confirmed the report.

This spring, Johnson battled with incumbent starter Kelly Bryant and 5-star phenom Trevon Lawrence, an incoming freshman and the No. 1 prospect in the 2018 class. (It makes one wonder: Does this mean Lawrence is even closer to nabbing the QB1 spot?)

Johnson will be required to sit out and reshirt, regardless of where he winds up next.

Any ACC Schools in the mix?

Prior to his commitment to Clemson, Hunter Johnson received scholarship offers from a robust selection Power Five program, including several ACC schools: NC State, UNC, Miami and Florida State. Obviously, future interest from those ACC programs could be restricted.

However, one of the the finalists for Johnson was Notre Dame; in fact, Johnson visited South Bend on multiple occasions. Brian Kelly is still the head coach at Notre Dame, but Mike Sanford led Johnson’s recruitment for the Irish, per 247 Sports. Sanford is no longer in South Bend, though; he’s entering his second season as the head coach of pass-happy Western Kentucky.

As a true freshman, Johnson was part of a two-man rotation backing up Bryant. The other half of that combination — Zerrick Cooper — transferred to Jacksonville State back in January. When Bryant was injured in the loss at Syracuse, Cooper received the second half snaps.

In 2017, Johnson completed 21-of-27 passes (77.8 percent) for 234 yards, two touchdowns and an interception. His best performance of the season came against The Citadel last November: 7-of-8 pass attempts for 144 yards. In that game, Johnson hooked up with fellow rookie Tee Higgins for a 78-yard touchdown, the longest completion of Johnson’s brief career.

Another notable performance for Johnson: Clemson’s home win over Wake Forest. In relief of Bryant, who suffered an ankle injury, Johnson completed 5-of-5 passes for 42 yards and a touchdown.

On the season, Johnson averaged 8.1 yards per attempt and was sacked once, too. He completed 5-of-7 passes on third down.