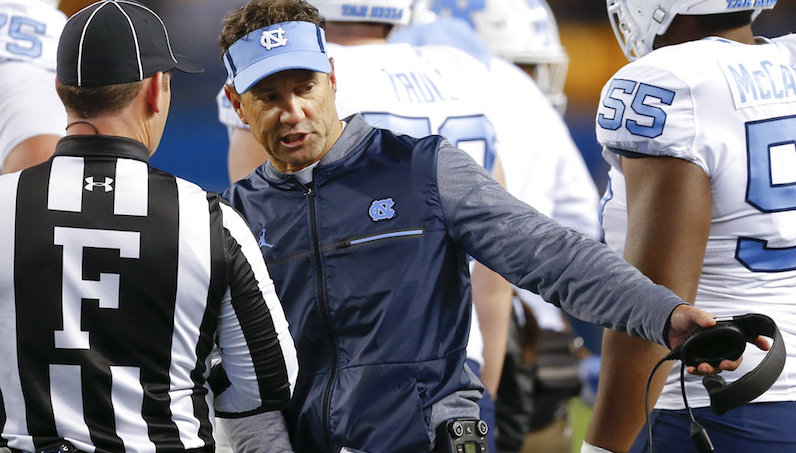 With the way Larry Fedora operates the UNC football program, nobody will publicly know who the Tar Heels’ starting quarterback will be until sometime in late August or early September. In fact, the final answer as to who leads the UNC offense on the field may not ultimately be known until the unit takes the field at Cal on Labor Day weekend.

Nathan Elliott and Chazz Surratt are the top options – a pair of left-handed, dual-threat quarterbacks who took their lumps in 2017.

Surratt was the more highly-touted prospect coming out of high school, and had back-to-back games against Old Dominion and Duke in which he threw for 259 yards. But aside of that, it was a tough road for the redshirt freshman.

Surratt threw only eight touchdown passes, and threw for less than 180 yards in all but two of the games in which he played in. He was sacked 14 times, and spent much of the season running for his life before taking a big hit at Virginia Tech, which effectively ended his season as the UNC starter.

Elliott found some success late in the year when he led the Tar Heels to a 65-10 win over Western Carolina, as well as their only ACC victory – a 34-31 road triumph at Pitt. But like Surratt, Elliott also spent much of his time on the field getting chased, as he was sacked nine times.

The Tar Heels were competitive in every game Elliott played significant minutes in. UNC hung with Coastal Division champion Miami until the fourth quarter. And while Elliott threw three picks against the Canes, he also threw for 173 yards and a touchdown, breathing a little life into a stagnant offense.

After throwing for 475 combined yards and six touchdowns with no interceptions against Pitt and Western Carolina, Elliott threw for 278 yards and two scores against NC State, giving UNC a chance to win well into the fourth quarter. A pair of costly interceptions aided to Carolina’s 33-21 loss to the Wolfpack.

One of the areas in which Surratt has an edge is in turnovers. He only threw three interceptions all season last year in nine games, whereas Elliott threw five interceptions in five games. If Surratt can show an enhanced grasp of the UNC offense and avoid turnovers in training camp, he’ll have the inside track to beating out Elliott and becoming the starter for a second straight year.

But Fedora has shown the willingness to try out a two-headed system. He did it with Marquise Williams and Mitch Trubisky to keep Trubisky happy in Chapel Hill. If neither player separates from the other, Surratt and Elliott will both play against Cal. Fedora may give both of them a couple series anyway early in the game, allowing them a chance in game situations to step up.

The Tar Heels should have the benefit of an improved receiving corps. Austin Proehl is gone, but Anthony Ratliff-Williams returns after having big games last fall against Duke and NC State. UNC is also getting an infusion of young receiving talent in Dyami Brown and Antoine Green, and possibly Jordyn Adams if he doesn’t play professional baseball. But the Tar Heels have some holes along the offensive line. It will be tough for Elliott and Surratt to get a whole lot better – and subsequently for the 2018 Tar Heels to improve – if they can’t get more time to throw.