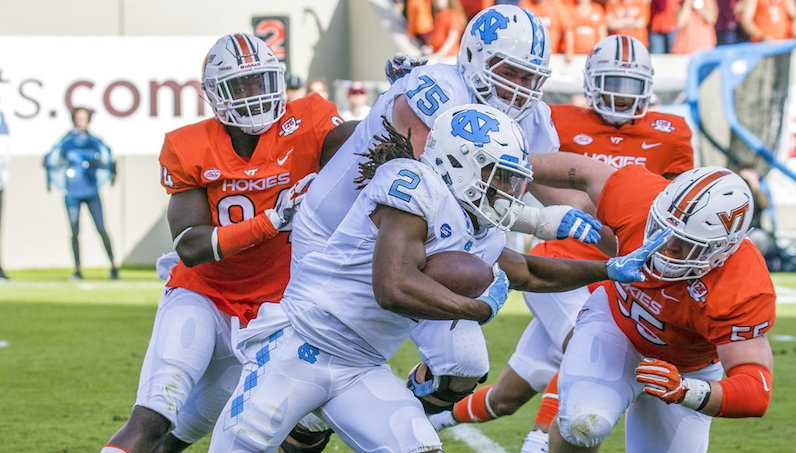 In a summer of dreadful news surrounding the UNC football program, the Tar Heels did get one positive piece of information in late July. The University announced that Antonio Williams, the transfer running back from Ohio State, would be eligible in 2018.

“You’ve got another guy that’s very bright,” UNC head coach Larry Fedora said of Williams. “He’s gifted. He’s got great quickness and balance. He will definitely be a factor for our football team.”

With Williams eligible, the Tar Heels head into the 2018 season with a three-headed running back tandem of Williams, Jordon Brown, and Michael Carter. None among that particular trio are involved in the shoe-selling that resulted in 13 players being suspended for various lengths this fall. And after getting a taste last season, all three players are hungry for more prominent roles.

Brown and Carter had decent 2017 seasons, with Brown leading the Tar Heels with 613 rushing yards, and Carter, a true freshman, averaging a healthy 5.8 yards per carry and leading UNC with eight rushing touchdowns. Between them, Brown and Carter combined for 1,172 rushing yards last fall.

Now UNC adds in Williams, who rushed for 290 yards on 57 carries (5.08 yards per carry) in a backup role last season at Ohio State. Over 13 games with the Buckeyes, Williams averaged an even five yards per attempt, but couldn’t crack OSU’s two-deep with freshman phenom J.K. Dobbins in the mix alongside the more experienced Mike Weber.

But despite his setbacks in Columbus, Williams arrives in Chapel Hill with a new lease on his college life. With two seasons of remaining eligibility, Williams gives UNC a steady presence in the backfield – and another key body if the team faces the same rash of injuries they did a year ago.

“The great thing about Antonio has been his attitude. He’s got a smile on his face. And an even bigger smile now that he knows he can play this year,” Fedora said.

Fedora, as is his nature, was coy when asked whether the Williams/Brown/Carter tandem can lift UNC back to the offensive heights they achieved earlier in the decade.

“It’s still too early to tell that,” he said.

Blast from the past?

With this trio, however, the Tar Heels are getting closer to having the kind of offensive backfield depth and talent that propelled them to the top of the Coastal Division twice in four seasons.

Giovani Bernard and A.J. Blue led the way in 2012, while the trio of Elijah Hood, Marquise Williams, and T.J. Logan cleared the path in 2015.

With Williams in the fold, UNC can be more versatile offensively. They can move Brown and Carter around, including in the slot, to maximize the offense’s athleticism on certain plays. They can have additional options in goal line and short-yardage downs. They will be able to liberally insert all three players into the backfield, helping to wear down opposing defenses.

While Brown is an all-purpose back who finished fourth on the Tar Heels with 237 receiving yards last season, and Carter is a speed back who is particularly effective in open space, the 5-11, 210-pound Williams is a more traditional every-down back. Williams is used to carrying a heavy load, having recorded three consecutive 2,000-yard rushing seasons at North Stanly High School in New London, North Carolina.

With two years of seasoning at a national powerhouse, it shouldn’t take long for Williams – the season opener against Cal, potentially – to prove that he’s ready to become a featured back at the college level.

Read more: Why the 4-game absence of Malik Carney will cost UNC football