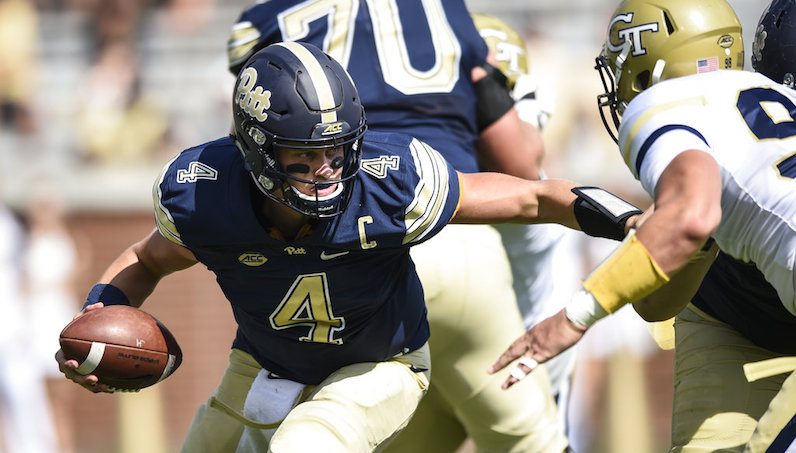 Unfortunately, this can’t be what Max Browne signed up for at Pittsburgh. It was always going to be a season of adjustments for Pitt football. In one offseason, the Panthers attempted to replace a lot of brain trust and talent.

Nathan Peterman — one of the most efficient passers in the FBS in 2016 — left a void at the quarterback position (47 touchdowns in 26 career games); James Conner, the face of Pitt’s program, and the ACC’s all-time touchdown leader, is now in the NFL, too. Offensive coordinator Matt Canada, formerly of NC State, left town after one season to jump to LSU.

Most programs would struggle given those key departures; however, times have been especialy tough at Pitt this year — where the Panthers are now just 2-4 and winless in the ACC.

One of the biggest problems for Pitt this season has been the offensive line play. The ground game has yet to take off, and part of that is a simple lack of running lanes. This team misses former tackle Adam Bisnowaty.

According to Football Study Hall, Pitt’s offense has an Opportunity Rate of 32.3 percent — No. 116 in the FBS. This means the offensive line is “doing its job” on less than one-third of the team’s carries. Essentially, less than 33 percent of the time, Pitt ball carriers are unable to gain at least five yards.

That’s a problem, and it’s also severe decline from a season ago; Pitt ranked 54th nationally in Opportunity Rate — 40.9 percent — in 2016.

The issues haven’t been on just the ground, though. The Panthers have allowed a sack rate of 6.2 percent, per Football Study Hall, on standard downs. That ranks No. 94 in the FBS; again, that’s a serious drop from 2016.

Part of what made Peterman so efficient was the team’s disciplined pass protection. In 2016, Pitt posted a sack rate of just 2.7 percent — a top 20 number — on standard downs.

In his final season at Pitt, James Conner rushed for 1,092 yards and 16 touchdowns. He posted six 100-yard rushing performances; within the ACC, only Lamar Jackson, Dalvin Cook and Matt Dayes had more.

So far this season, the Panthers have yet to produce one 100-yard individual rushing game. This is uncharted territory for Pitt under coach Pat Narduzzi. Virginia is the only other ACC program in 2017 that has yet to have one 100-yard runner.

The Cavaliers are of course replacing Smoke Mizzell, too, but at least Kurt Benkert and the team’s receivers have the passing attack going. Outside of the victory over Rice, Pitt certainly can’t claim that.

Conner also averaged 6.5 Highlight Yards per Opportunity, per Football Study Hall. This means on carries when they line created at least five yards of running room, Conner gained an additional 6.5 yards, on average.

Prior to the season, it looked as though Max Browne — a graduate transfer from USC — would be a snug fit at Pittsburgh. A former 5-star stud recruit, Browne would work with a staff that had success with a previous transfer QB — Peterman — and returned multiple productive receivers — Jester Weah and Quadree Henderson, a favorite of ours at the ACC Analytics page.

Peterman was a tough act to follow, but man, things were tough for Browne, who will now miss the rest of 2017 due to shoulder surgery following the Syracuse loss.

Browne lit up the skies in the victory over Rice; in that game, Browne became just the ninth FBS player to throw for 400-plus yards, four-plus touchdowns and zero interceptions in a game this season.

That, however, is the lone real bright spot. Outside of that game, here’s a look a Max Browne’s season stats:

The completion percentage is fine, but from the yards per attempt average, it’s obvious that there are a lot of empty calories in there, too. Pitt ranks 119th nationally in Isolated Points per pass play, according to Football Study Hall.

Up next, bad news: NC State and Duke

Things certainly won’t get any easier for Pitt — at least not in the near future; NC State and Duke are the next two opponents on the schedule. The Wolfpack — led by Bradley Chubb — and Blue Devils feature two of the best defensive lines in America, which I detailed yesterday.

That doesn’t bode well for the team’s new starting quarterback Ben DiNucci, who will replace Max Browne under center.

Clemson’s Defensive Line: In a league of its own…kind of