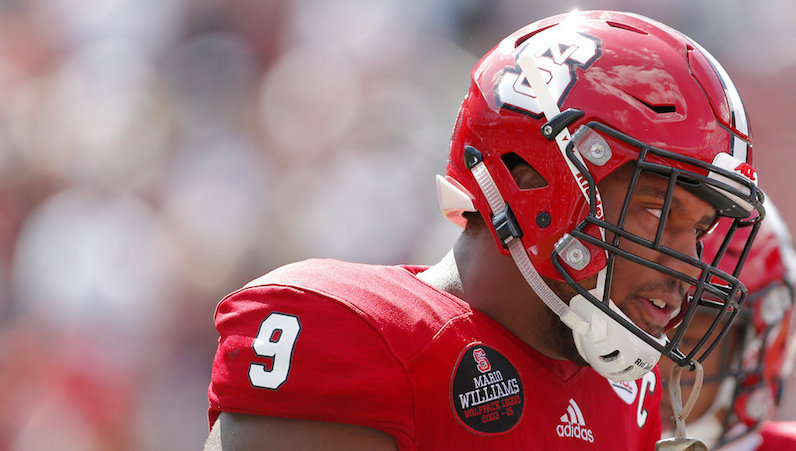 Right out of the gate, I’m just going to get this out there: I have no care for Bradley Chubb spitting on the field last week after the win at Florida State. Maybe it’s not a great look, but the pearl-clutching over this has been a bit extreme.

If you have time to actually care about that, and find yourself getting upset over that action, wow, you live an awfully privileged life.

Now, enough of that; in this post, we’re going to focus on the play of Bradley Chubb, which has been spectacular in his senior season.

Building up an already stellar foundation

Chubb is one of only 16 active FBS players with over 15 career sacks, per Sports Reference. He has 3.5 sacks on the season, including two in the over over FSU, which ranks fourth in the ACC.

Against Florida State, Chubb collected two sacks and seven total tackles. In the first four weeks of the season, that’s happened only 31 times.

Football Study Hall tracks a statistic called run stuffs. This is a measure of how many times a player or team stops a rush at or behind the line of scrimmage. It’s a useful stat.

As a team, NC State has record 38 runs stuffs in its first four games — a little over nine per contest. Well, Bradley Chubb leads the Wolfpack with nine of those run stuffs — or 23.7 percent.

No other player has more than four; linebackers Airus Moore and Jerod Fernandez are tied for second on the roster.

Living up to the hype

Entering the 2017 season, there was plenty of positive buzz surrounding NC State. A prime reason for the hype was the team’s defensive line — anchored by Chubb, Kentavius Street, Darian Roseboro, B.J. Hill and Justin Jones.

Chubb, a potential early-round pick in the 2017 NFL Draft, returned for one final run in Raleigh. So far, this group has delivered. According to Football Study Hall, NC State’s defensive line ranks 16th in the FBS in Havoc Rate.

On 6.4 percent of the team’s defensive players, the front four of the Wolfpack has either recorded a tackle for loss, forced a fumble, or defensed a pass. That metric ranks better than that of Alabama’s defensive line (3.4 percent). The national average, per Football Study Hall, in 3.9 percent.

The play of Chubb hasn’t gone unnoticed; the 6-foot-4 defensive end ranks in the top 20 of some mock 2018 drafts, too.