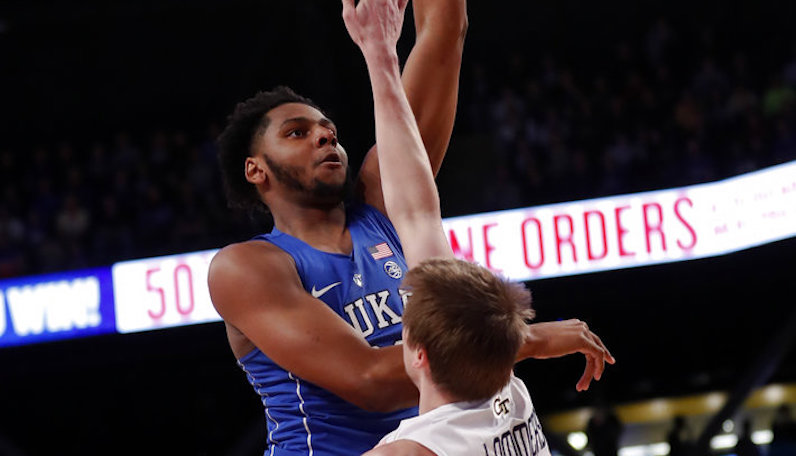 With Marvin Bagley sidelined for Sunday’s win at Georgia Tech, Duke started Marques Bolden. It was the second start of Bolden’s career — and his first since last January’s loss to NC State.

Bolden played 25 minutes against the Yellow Jackets, which is a career high. The sophomore center’s stat line won’t blow anyone away — eight points (4-of-7 FGA), six rebounds — but it was the third straight game Bolden has found ways to contribute offensively. Duke was also +15 with Bolden on the floor against Georgia Tech, and that’s a serious step in the right direction.

Since returning from an MCL injury that caused him to miss seven games, Marques Bolden has provided Duke with some nice, and possibly unexpected, production.

In games against UNC and Georgia Tech, Bolden went 8-of-11 from the field — 72.7 percent. According to Synergy Sports: Bolden went a combined 4-of-5 on post-up field goal attempts in those two games. The hostile environment of the Dean Dome did little to both Bolden, who looked confident and played physically.

Marques Bolden is also shooting 60.7 percent and scoring 1.32 points per possession on non-post-up attempts at the basket. In the win over Georgia Tech, Bolden connected on 2-of-3 cut field goal attempts.

All 53 of Bolden’s field goal attempts this season have come around the basket; he’s yet to attempt a jump shot. Sticking to his role is working: according to KenPom, Bolden has an individual offensive rating of 114.3 points per 100 possessions — which has jumped to 133 in ACC games.

It would be a significant boon for Duke if the Blue Devils can continue to get 12-20 minute of efficient offense each game from Bolden. There are still liabilities on the other end of the floor; however, Duke will take whatever it can get from Bolden to supplement the incredible production of Bagley and Wendell Carter. Bolden is tall and big — as long as he plays hard defensively, some good stuff should follow.

Now, if only Duke could get Trevon Duval right, too.

Jay Williams on Duke’s man-to-man defense: “That’s been an issue for Duke all season long”