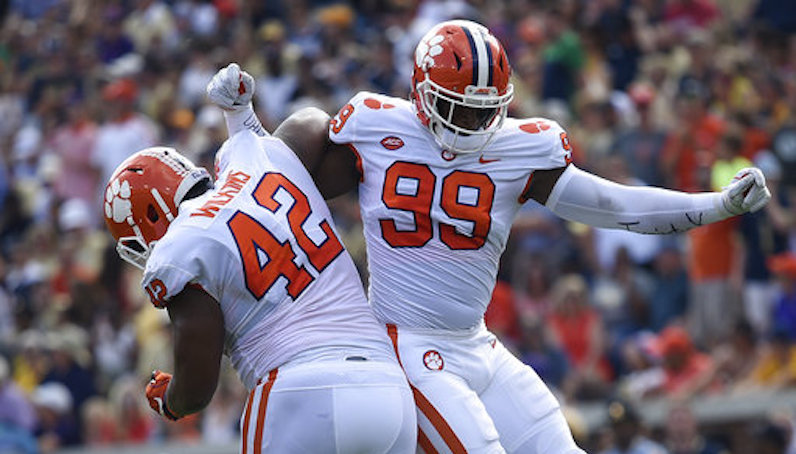 In the middle of Saturday afternoon, the eyes of the college football world will turn to Death Valley in South Carolina: No. 16 NC State at No. 3 Clemson. The game will pit two of the five unbeaten Power Five teams against one another; of course, the winner gets the inside edge for the Atlantic Division, too.

One of the key matchups to watch within the game: Can NC State protect long enough for Ryan Finley to have time to throw from the pocket? As everyone knows, Clemson boasts one of the top defensive lines in recent memory. And while State has struggled at times to run the ball this season, the line has done an excellent job creating a pocket for Finley.

When he has time to throw, especially with this excellent receiving corp, the Pack can hit a level on offense that could possibly spring a road upset.

For the season, NC State has allowed a total of just two sacks across five games (0.4 per game), which is the second fewest in the FBS; only Buffalo has allowed fewer. Considering the high volume of drop-backs — Finley averages over 37 pass attempts per game — that’s really impressive.

According to Football Study Hall, Finley has a microscopic sack rate of only 1.1 percent this season — one of the best marks in the nation. Led by interior studs center Garrett Bradbury and guard Terronne Prescod, NC State also leads the FBS in blitz down sack rate (0 percent) and Success Rate (57.1 percent). The Pack has completed nearly 61 percent of its third downs this season, too, which is tops in the nation — just ahead of Alabama (56.8 percent).

Finley has been especially good on third down: 37-of-54 (68.5 percent) for a combined 31 touchdowns or first downs, and just one interception. The veteran quarterback has 13 completions on third down of 15 or more yards, too.

It certainly helps to have options, and Finley has just that: four receivers with 15+ receptions and catch rates above 63 percent, per Football Study Hall.

NC State’s line must hold the fort down because on the other side of the ball, wow, is this Clemson front four something to behold. Led by Clelin Ferrell’s six sacks, the Tigers averaged 3.3 sacks per game. Austin Bryant, another future NFL rush end, is second on the team with three sacks.

With Christian Wilkins, Dexter Lawrence and freshman Xavier Thomas in the mix, too, Clemson’s defensive line ranks second nationally in Havoc Rate. According to Football Study Hall, Clemson’s front has recorded a tackle for loss, forced a fumble, or defensed a pass on 11.7 percent of the plays it has faced.

Clemson has been especially good against the run — with a stuff rate of 27.4 percent and an opponent Opportunity Rate of only 35 percent, good for fourth in the FBS. This means on run plays that opponents have run for under five yards on 65 percent of their carries.

If NC State can’t run at Wilkins and Lawrence (most teams have issues here), then it’s up to Finley and the receivers. That could play into the hand of Clemson, though. The Tigers also rank fourth in the FBS in sack rate: 11.6 percent.

That last two meeting between Clemson and NC State have been close, one-possession affairs, including an overtime defeat the last time the Wolfpack traveled to Clemson.

Last season against NC State, Clemson sacked Finley just once in the game — courtesy of Ferrell. Even though the Tigers had only one sack, they still got after Finley; Ferrell had five Havoc Plays and recorded 10.5 total tackles, including five for loss. Finley threw two interceptions in the game, too.

The year prior, in 2016, Clemson recorded four sacks and forced Finley into another two-interception performance. In that contest, the Tigers actually lost the turnover battle but one the game, which is a bit a of rarity. (Three missed field goals by Kyle Bambard certainly played a part in that, too.)

It’s reductive to boil a game down to one matchup; there’s simply too much happening for it to be that simple. However, this is strength (NC State’s pass protection) vs. strength (Clemson’s pass rush), and whoever comes out with the edge here has an excellent chance at remaining undefeated on Saturday.

Travis Etienne continues to add to his Heisman Trophy candidacy