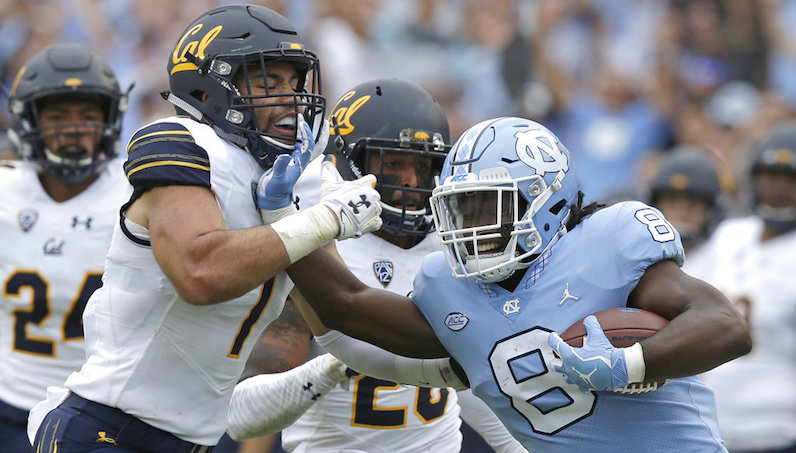 As North Carolina works to find its new quarterback — Chazz Surratt or Brandon Harris — the Tar Heels are also attempting to move past running backs Elijah Hood and T.J. Logan. Hood and Logan were standouts over the last four seasons of football in Chapel Hill; it’s not easy replacing two NFL-caliber running backs.

However, UNC has a new duo that’s pretty good, too: Michael Carter and Jordon Brown.

Michael Carter and Jordon Brown have both carried the ball 19 times over the first two games of the 2017 season. Carter, despite not seeing as much daylight as Brown, has been fairly prolific.

Opportunity Rate measures the percent of carries that an offensive line does its job — creates five yards of rushing room for the running back. Highlight Yards per Opportunity measures the average yards per carry after the line has done its job; this is the part of the run that the ball-carrier is assigned credit for.

Surratt and Carter displayed some nice chemistry in the option game, too; both of Carter’s touchdowns against California came on option plays.

“Check it to pancakes”

One of the ways Jordon Brown has made an impact is in the passing game; the sophomore back has proven to be a reliable target for Brandon Harris and Chazz Surratt.

Brown hasn’t exactly been a big play threat (61 receiving yards), but he’s caught 10 passes of 11 targets — a catch rate of 90.9 percent. That’s the best of any player on North Carolina’s roster with at least five targets, per Football Study Hall. Four of Brown’s receptions have gone for first downs, too.

In the game against Cal, Brown caught all seven of his targets. He is also tied with Thomas Jackson as the second most targeted player for the Tar Heels (14.1 target rate). Austin Proehl is No. 1: 14 targets.

Michael Carter, however, hasn’t been quite as effective; the freshman back has two targets, but has yet to catch a pass.

How long will it take for Larry Fedora to settle on a quarterback?

Nathan Leacock: Can NC State or UNC gain the inside edge for the 3-star WR?