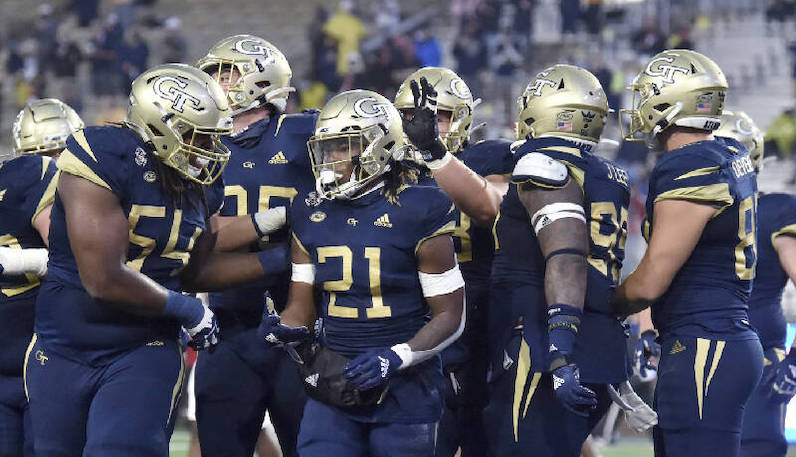 AP photo by Hyosub Shin / Georgia Tech running back Jahmyr Gibbs, a freshman from Dalton, celebrates after scoring a touchdown during the first half of Friday's home game against Louisville. Gibbs had a touchdown run and a touchdown catch as the host Yellow Jackets won the ACC matchup 46-27.

What does Jahmyr Gibbs have in store after a strong freshman season in 2021? For several years now, Clemson’s Travis Etienne was the gold standard for the running back position in the ACC; however, a new leaf has turned over in the ACC. Questions pertain to guys like Gibbs and Bam Knight; how they answer those queries will determine the league’s next top back.

With the season just a few short weeks away, let’s take a look at the conference’s top running backs as we enter the post-Etienne era.

Making something out of nothing: there’s a reason why Re’quan Boyette, Duke’s co-offensive coordinator, believes Durant is the best player on Duke’s roster.

Despite an offense that lacked any passing game punch, Mateo still managed to run for 817 yards and eight touchdowns on 120 carries: 6.8 yards per rush.

Mateo Durant is pretty good, and he made Duke's ground game effective despite absolutely woeful QB play last year; Only Utah had a higher % of its run plays stopped for loss or no gain than Pitt among P5; BC saw a 23.5 percentage point shift from run plays to pass in 2020.

Mason is one half of the best running back duo in the ACC and an advanced metrics darling. He’s one of the league’s best at forcing missed tackles.

Mason is one of the few bridges on the roster that still extends back to the Paul Johnson era. However, if Geoff Collins is going to make it work in 2021, he’ll need a lot out of Mason, who battled injury (only 82 carries) in 2020.

Since his arrival at Clemson as one of the top all-purpose backs in the 2018 recruiting class, Dixon has waited to be the featured back for the Tigers. That requires patience when you’re backing up arguably the greatest skill position player in ACC history: Travis Etienne, who opted to return for his senior year in 2020.

While working as a reserve, change-of-pace back, Dixon has put together a stellar career: 1,372 rushing yards and 13 rushing touchdowns on 208 carries — 6.6 yards per carry.

Don’t sleep on Lyn-J Dixon in the Clemson backfield 📈 pic.twitter.com/ThFxCFJ9Yt

In fact, over the last three seasons Dixon ranks 15th in the ACC in total rushing yards. Going back to the 2018 season, only two ACC players with 1,300+ rushing yards in that span have averaged more yards per carry than Dixon: Etienne (7.2) and UNC’s Michael Carter (6.8).

Dixon has 47 carries of 10+ yards to his name; this accounts of 22.6 percent of his career carries at Clemson.

This will be different now, though. Without Trevor Lawrence and Etienne, Dixon is not only The Man at RB; he’ll have to take on that task without the No. 1 pick keeping defenses honest. (Although let’s be real: no one will feel bad for a lack of talent at Clemson, nor should they. This roster is still loaded.)

A slashing runner with good speed, Knight looks ready for a big 2021 season. It certainly doesn’t hurt that the setup in Raleigh is study: strong offensive line play (albeit with some disappointing run-block numbers last season), a productive group of veteran skill players and a promising young quarterback.

Over 18 percent of Knight’s 2020 carries (26) went for 10 or more yards. He also closed the season with a rushing touchdown in six straight games — seven touchdowns over that span.

According to Pro Football Focus, Knight averaged 0.34 broken tackles per attempt — tied for fourth among all Power Five running backs in 2020.

There is a three-way tie to be the most elusive RB returning to CFB (missed tackles forced / attempt):

Knight wasn’t done there, though. He also caught 20 passes (+13 over his freshman year) for 136 yards, working mostly as a checkdown machine.

Over on special teams, Knight was a key contributor, too. Knight finished second in the ACC with an average of 26.6 yards per kickoff return, which includes a 100-yard kickoff return for a touchdown against Miami. Knight averaged 108.1 all-purpose yards per game, good for sixth in the conference.

Gibbs entered Georgia Tech with massive expectations. During his freshman season, he managed to exceed those lofty forecasts.

Gibbs broke 0.39 tackles per rushing attempt (No. 2 in the FBS) and averaged 4.17 yards after contact per attempt, according to Pro Football Focus.

However, Gibbs was equally as impressive catching the ball out of the backfield.

According to Pro Football Focus, Gibbs posted a receiving grade that’s one of the best numbers ever recorded by a Power Five running back, since PFF started tracking/charting this data seven years ago.

When it came to catching out of the backfield, no one in the SEC was better than Ty Chandler. He averaged 8.6 yards after the catch per reception and turned in 3 touchdowns through the air. pic.twitter.com/uima6T8eMk

More than any power-five player had total rush yards. pic.twitter.com/Av1wgTDJSg

I love Sean Tucker's tweets almost as much as his game.

He will be special and already is.