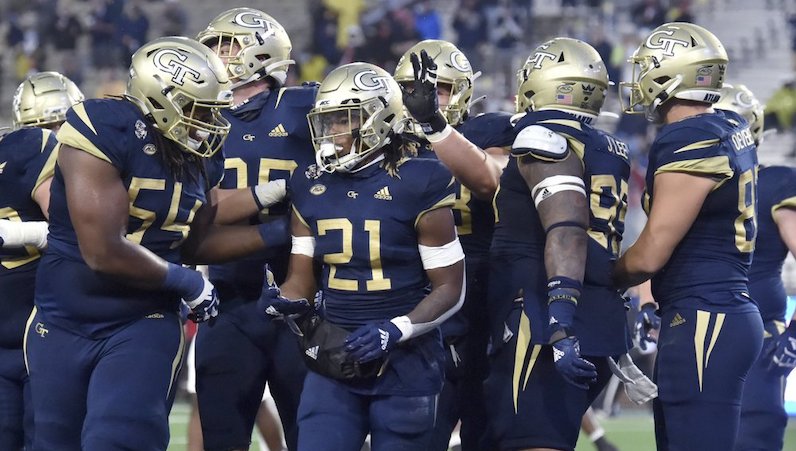 Georgia Tech running back Jahmyr Gibbs (21) celebrates after he scored a touchdown against Louisville during the first half of an NCAA college football game Friday, Oct. 9, 2020, in Atlanta. (Hyosub Shin/Atlanta Journal-Constitution via AP)

Every week during the 2020 football season we will highlight five ACC rookies that put together standout performances. This edition features two sets of teammates and two players — Jahmyr Gibbs and Myles Murphy — that continue to emerge as special ACC talents.

In a short period of time, Jahmyr Gibbs has proven himself to be among the most versatile, complete offensive players in the ACC. Over the first three games of his young career, Gibbs has five touchdowns (at least one in every game); the freshman running back has recorded 120+ yards from scrimmage in all three games, too.

During the win over Louisville, Gibbs ran for 61 yards and a touchdown, while snagging two passes for 60 yards, including a 19-yard touchdown hookup from Jeff Sims, which gave Georgia Tech a fourth-quarter lead.

The 2020 season will be one hell of a learning experience for Sims, who put together another solid performance against Louisville.

Sims completed 11-of-21 pass attempts for 249 yards (11.9 yards per attempt) and two touchdowns, while running for 64 yards and another score. More importantly, perhaps: this game marked the first turnover-free performance of his young career.

After his debut in last week’s 1st-and-5, Porter Rooks followed things up with another strong outing on the road vs. Virginia.

Rooks hauled in three passes for 51 yards — 17 yards per catch. Those are solid numbers for a freshman receiver in bad weather. Rooks flashed excellent hands work, with several highlight plays, including 25-yard grab against double coverage.

However, the best effort from Rooks on Saturday came on a play that was eventually ruled an incomplete pass.

In an excellent display of body control and concentration, Rooks went full extension and nearly hauled in a pass from Devin Leary. The juggling catch was initially rule a touchdown, but after replay, the call on the field was overturned.

Porter Rooks with the one-hander to start the day off right for NCSU pic.twitter.com/EePYlSddAg

On the other side of the ball, true freshman defensive back Joshua Pierre-Louis had a big day, too. Pierre-Louis, a former 3-star recruit, made his first career start and delivered with four solo tackles — plus an interception.

Joshua Pierre-Louis has played really really well today. Great to see out of the True Freshman.

Clemson’s defense put forth a dominant effort in last week’s blowout win over Miami. The Hurricanes turned the ball over three times, while racking up just 210 yards of total offense. Freshman defensive end Myles Murphy played a role in this effort.

Once again, Murphy flashed his elite combination of size and explosion coming off the end of Clemson’s defensive line.

Freshman Myles Murphy with good ball get off and the long arm to get the sack. pic.twitter.com/tu8dSBzjEK

Murphy recorded four more tackles, including one for a loss. The former blue-chip recruit now has six tackles for loss this season, which ranks sixth in the ACC.

Clemson continues to dominant in this week’s Power Rankings