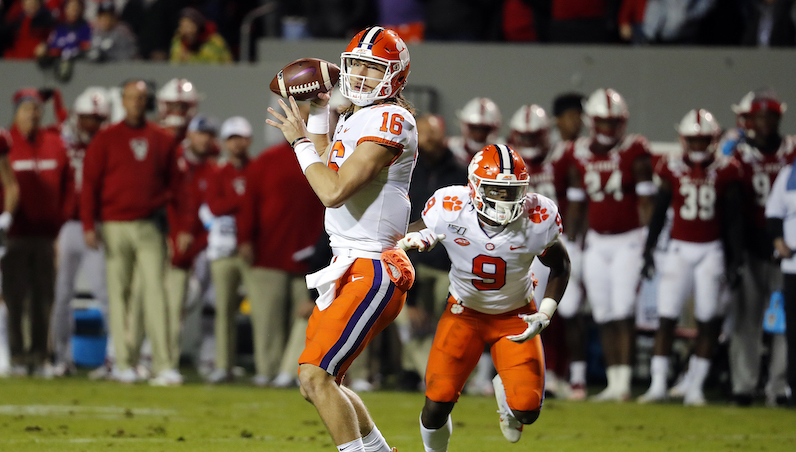 Clemson's Trevor Lawrence (16) prepares to throw the ball with teammate Travis Etienne (9) nearby during the first half of an NCAA college football game in Raleigh, N.C., Saturday, Nov. 9, 2019. (AP Photo/Karl B DeBlaker)

Let’s jump right into this week’s ACC Football Power Rankings, starting with (who else?) Trevor Lawrence and the Clemson Tigers.

There’s been plenty of hand-wringing over Trevor Lawrence this season, including injury concerns and efficiency questions. Well, over the last three weeks, Lawrence has gone 48-of-62 (77 percent) through the air for 769 yards (12.4 yards per attempt), nine touchdowns and zero interceptions. He’s also run for two touchdowns in that span, too.

For his career Trevor Lawrence has 28 TD passes and no interceptions in the red zone.

Clemson won those three games with a point differential of +142.

For the fourth time this season, Bryce Perkins led Virginia in passing and rushing during the home win over Georgia Tech on Saturday — his second straight 100-yard rushing performance.

Only two quarterbacks in college football have at least 2,000 passing yards and eight rushing TD’s on the season.

Kudos to Jarren Williams, who has helped spark a late-season charge for Miami. During the win over Louisville, Williams became the first ACC player since Lamar Jackson in his Heisman Trophy season to throw for six touchdowns and no interceptions in the same game.

Remove three INTs in one bad quarter and Jarren Williams would have 16 TDs and no picks this year. Of course, if you remove three bad plays (4th and 17, missed PAT, missed easy FG), UM could be 9-1 after today

Up Next: at Florida International

Virginia Tech has now won four out of its last five games. Justin Fuente and the Hokies travel to Charlottesville for a Nov. 30 showdown that could have serious Coastal Division implications.

I can’t believe I bailed on this team after Duke. They have shown a level of heart and resolve of a team MUCH older.

Justin Fuente deserves a world of credit for turning the program around after hitting rock bottom six weeks ago.

Up Next: at Georgia Tech

There are only three FBS teams that average at least four sacks per game: SMU (4.2), Pittsburgh (4.44) and Ohio State (4.56). Pittsburgh will need that pass rush to take flight this week when the Panthers host Sam Howell. (Miami ranks fourth in the nation with 3.7 sacks per game.)

Playing without Scotty Washington, Wake Forest’s offense never got going on Saturday at Virginia Tech. This was a rough game for Jamie Newman, who completed 45.7 percent of his passes and tossed two interceptions, too.

Up Next: at Clemson

After flying high for the last month or so, the Cardinals crashed down with a 52-27 loss at Miami. Louisville ran the ball for only 168 yards (4.8 yards per carry) against Miami — one of the team’s lowest totals this season. The Cards are now 0-3 when they run for less than 200 yards in a game this season.

Up Next: NC State

North Carolina has beaten Pittsburgh every year since the Panthers entered the ACC — six straight. After 12 days off for both teams, Thursday night presents an interesting matchup in the Coastal.

Since 2013, UNC is the only Coastal Division team that Pittsburgh hasn't beaten. The Tar Heels are 6-0 against the Panthers. Pitt's last win was 19-17 in the bowl game in Charlotte in 2009.

Hats off to Odell Haggins — FSU was absolutely ready to play on Saturday. James Blackman threw for 346 yards — the second best outing of his career — and two touchdowns during the win at Boston College.

Odell Haggins has coached 3 career games & has as many road wins at FSU as Willie Taggart does & more career bowl wins.

That's…unbelievable & not something I thought I'd be typing this November.

Up Next: Alabama State

Duke continues to struggle challenging its opponents with a limited vertical passing game. This was all too easy for Notre Dame’s defense on Saturday, winning 38-7. The Blue Devils have now dropped three straight games.

Entering last weekend with a 5-4 record, Boston College’s home game with Florida State presented a major opportunity. The Eagles, however, fell and head into the bye week at 5-5. The final two games of the regular season are both on the road, too: Notre Dame and Pittsburgh.

“What is a dramatic representation of NC State’s 2019 football season, Alex?”

the result of a scramble by Trevor Lawrence pic.twitter.com/E40pDkQx2w

Even as Georgia Tech has managed to play friskier football late in the season, the strong play of running back Jordan Mason has mostly flown under the radar. Mason is a physical runner and one of the best in the ACC.

After Week 11, the most missed tackles forced on the ground:

Most missed tackles forced after the catch:

Up Next: Virginia Tech

This hasn’t been a banner year for Syracuse, which is 0-5 in conference play with a point differential of -97.

Up Next: at Duke