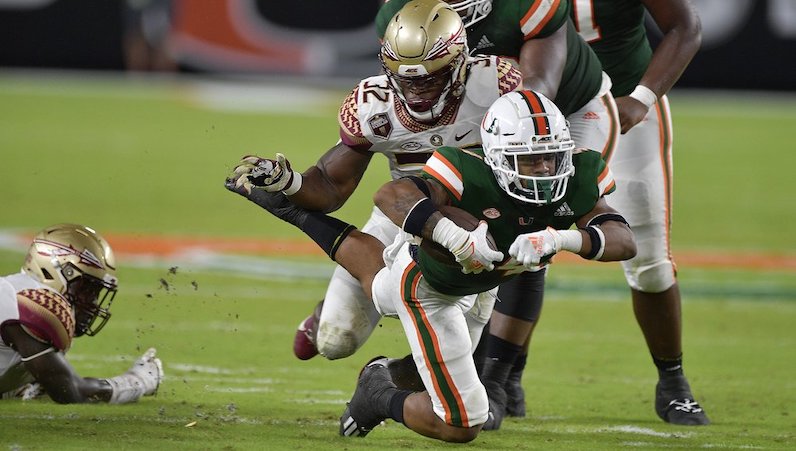 Every week during the 2020 football season we will highlight five ACC rookies that put together standout performances.

The youth movement continues on the offensive side of the ball around the league. Miami has a dynamic rookie duo in the backfield — Jaylan Knighton and Donald Chaney Jr. — while Pitt’s Jordan Addison leads the league in receptions. Georgia Tech’s Jahmyr Gibbs may be on his own level.

However, it was Virginia wide receiver Lavel Davis Jr. that stole the show this week.

In his college debut, the 6-foot-7 Davis, a 3-star recruit out of South Carolina, was put to good use. Virginia leveraged the size mismatch with Davis on the perimeter to routinely target the rookie receiver; Davis hauled in four grabs for 101 yards and two touchdowns.

For his efforts, Davis brought home two of the ACC’s weekly awards.

Following his third straight game with seven receptions, Jordan Addison now leads the ACC with 21 catches (10 on third down). During the win over Louisville, Addison turned his seven grabs into 77 yards and a touchdown.

Jordan Addison’s 21 catches on the season leads the ACC currently. He’s 7th in yardage and is tied for second with two touchdowns.

Addison is poised to be a catch machine at Pittsburgh for the foreseeable future.

This has become a weekly occurrence with Jahmyr Gibbs, who provided the lone bright spot during Georgia Tech’s loss at Syracuse.

Gibbs followed his strong debut against UCF with 105 rushing yards on 18 carries and two receptions for 26 yards and a touchdown, too.

Syracuse gets their first win of the season, separating early with a commanding 87.6% Win Prob

Through the first two games of his career, Gibbs has produced 394 all-purpose yards (197 per game) and two touchdowns. Gibbs is the only FBS player currently with at least 150 rushing yards, 50 receiving yards and 100 return yards on kickoffs.

There’s a lot to like with Miami’s offensive mix right now, which ranks fifth nationally in efficiency, according to ESPN. Cam’Ron Harris works as the de facto feature running back for the Hurricanes, while D’Eriq King sprays the ball around the a host of receivers in Miami’s pass game.

Ace tight end Brevin Jordan leads Miami with 15 receptions and three touchdowns, but 13 different players have caught at least one pass through the first three games. Simply put: this roster has plenty of weapons.

Donald Chaney Jr. on how the Canes spread the ball out tonight: "I've never seen anything like it…Coach Rhett obviously knows how to score, how to get points."

Along with Harris in the backfield, Jaylan Knighton and Donald Chaney Jr. — both true freshmen from Florida — continue to emerge as excellent sources of secondary offense. Knighton posted 63 yards from scrimmage on eight touches during the blowout win over FSU. Chaney ripped off two rushing touchdowns, too.