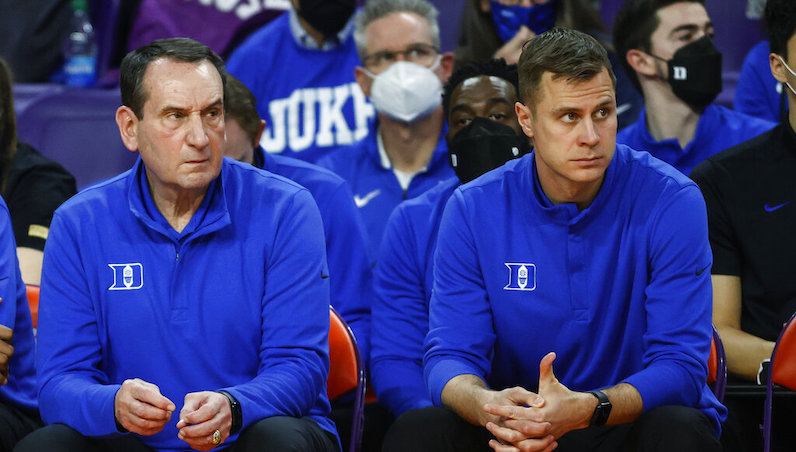 Duke defeated Wake Forest in Durham, 76-74, but the Blue Devils (22-4) did so without Mike Krzyzewski on the bench for the second half.

After a Jake LaRavia 3-pointer, the Blue Devils went into the locker room at half time with a 9-point lead, 42-33. As the teams returned to the floor to start the second half, though, Coach K was missing. (Speaking as someone who covered this game in person, word wasn’t announced, nor was it passed to the floor. I wasn’t even aware of Krzyzewski’s absence until the first or second possession of the half.)

Once again, Jon Scheyer took over as the team’s acting head coach for the final 20 minutes of play. A few minutes later, the official Duke men’s basketball Twitter account released a statement. Coach K wasn’t feeling well and wouldn’t return to the floor.

🐐 Update: Coach K is not feeling well. Will not return to bench tonight.

With Scheyer pulling the levers against Steve Forbes, Duke and Wake Forest engaged in an epic second half. The Demon Deacons outscored the Blue Devils 41-34; however, put-back finish from Mark Williams — off a missed layup by Paolo Banchero — with 0.4 seconds was deemed good following a review process.

BIG MARK FTW!!! (sorry Coach Scheyer was blocking us for a second) pic.twitter.com/k5cxPR9X5E

With the remaining time, though, Wake Forest drew up one of its two late-game/full-court plays. According to Forbes after the game, Wake Forest practices this play every day: LaRavia threw the ball in to Damari Monsanto, who let fly a running, one-handed heave from like 70-75 away from the rim. Miraculously, the shot just lipped out.

Imagine the world where Damari Monsanto hits this for Wake Forest and another Duke upset at Cameron Indoor happened 🎥pic.twitter.com/dEw0TE92fr

Now, 0.4 seconds is enough time to catch and quickly get a shot up; an attempt on the rim with that little time left doesn’t have to be a tap. However, given how Monsanto clutched the ball and then launched, this may not have counted — even if the ball had gone in.

“I don’t know what it is. Teams always come in here and do something crazy.”

Paolo Banchero described his thoughts on the last-second heave by Monsanto. pic.twitter.com/jVdWwBY8uT

After the game, Scheyer was asked multiple times about Coach K. Scheyer was mostly mum but relatively positive. According to Duke’s coach-in-waiting, Krzyzewski was already feeling better and had spoken with the team. In fact, Coach K actually remained at the arena for the remainder of the game.

“It was great to see he was up and doing well.”

Here’s Wendell Moore on seeing Coach K in the locker room after the game. pic.twitter.com/vwMQ1JsgIk

Scheyer mentioned that Krzyzewski needed rest — more than anything else.

Only five games remain on Duke’s regular season schedule. The next matchup is set for this Saturday in Durham, when Duke hosts and Florida State. Leonard Hamilton’s squad snapped a losing streak Tuesday night with one-point home win over Clemson.

Assuming Coach K is able to return to the bench, the game against FSU will be the penultimate home game of his 42-season tenure with Duke.

Duke, Wake Forest both land inside top 5 in this week’s ACC Power Rankings