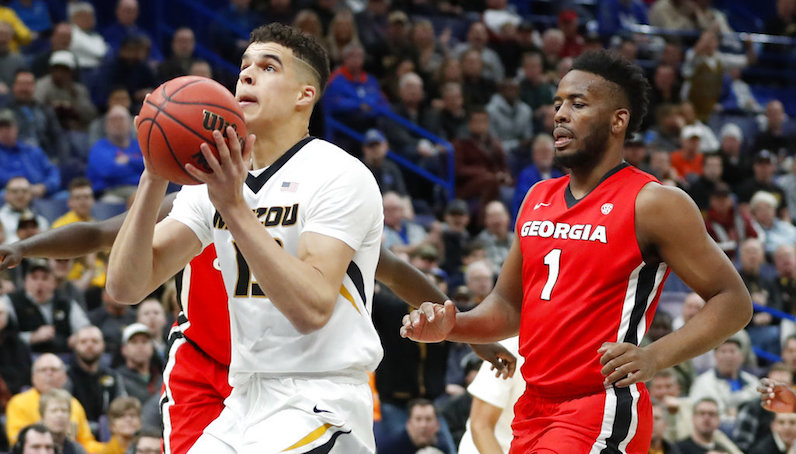 Missouri's Michael Porter Jr., left, heads to the basket past Georgia's Yante Maten during the first half in an NCAA college basketball game at the Southeastern Conference tournament Thursday, March 8, 2018, in St. Louis. (AP Photo/Jeff Roberson)

Florida State found balance in its first season without Jonathan Isaac, Dwayne Bacon and Xavier Rathan-Mayes thanks to offensive renaissances from Phil Cofer and Braian Angola. (I see you, too, Terance Mann.)

Where the presence of Isaac is missed most, though: the defensive side of the floor. This is not a traditionally great FSU defensive team; currently, the Seminoles rank 78th nationally in adjusted defensive efficiency, per KenPom. Despite some of the slippage, FSU remains one of the best shot-blocking teams in America — thanks in part to Leonard Hamilton’s desire to sign as many 7-footers as humanly possible.

The Seminoles rank 12th nationally in average height, per KenPom; that makes 10 straight seasons FSU has been one of the 10 tallest teams in America. In the majority of those years, Florida State ranked inside the top three.

If you enter the paint against the Seminoles, you better get used to rejection. Florida State has blocked 13.3 percent of opponent two-point field goal attempts this season — good for No. 22 in the nation, tied with Clemson. The ACC actually has six teams inside the top 25 of this metric, which is pretty wild.

The 7-foot-4 Christ Koumadjue is, of course, a difference-maker here. Koumadje blocked nearly 10 percent of opponent two-point attempts while on the floor this season — 5.1 per 100 possessions.

He’s not alone, though. Freshman center Ike Obiagu, a former 4-star recruit, has struggled offensively, but he’s made up for some of that by being a monster at the rim on defense.

Obiagu is the only player in America with a block rate above 20 percent this season, per Sports Reference. If that rate sticks, Obiagu will be the only Division I player to accomplish that feat, dating back to the 2009-10 season. Obiagu averages an insane 11 blocks per 100 possessions.

According to Synergy Sports — thanks in part to the presence of Koumadje and Obiagu — Florida State allows just 0.96 points per possession (46.3 FG%) on non-post-up attempts at the basket. That ranks fifth in the nation.

Michael Porter Jr. returned to the lineup for Missouri after missing 30 games this season, following back surgery. Porter, a projected lottery pick, didn’t quite have his A-game in Mizzou’s loss to Georgia in the SEC Tournament. He certainly wasn’t bashful, however.

On the court for the first time since playing two minutes in the opener against Iowa State, Porter launched 17 field goal attempts — making just five — and used 36 percent of Missouri’s possessions while on the floor.

The future first rounder, who went just 2-of-7 (28.6 FG%) on catch-and-shoot attempts against UGA, may have to hit some jumpers over FSU’s length if he’s counted upon for offense.

No. 1 UVA’s De’Andre Hunter to miss the 2018 NCAA Tournament with broken wrist