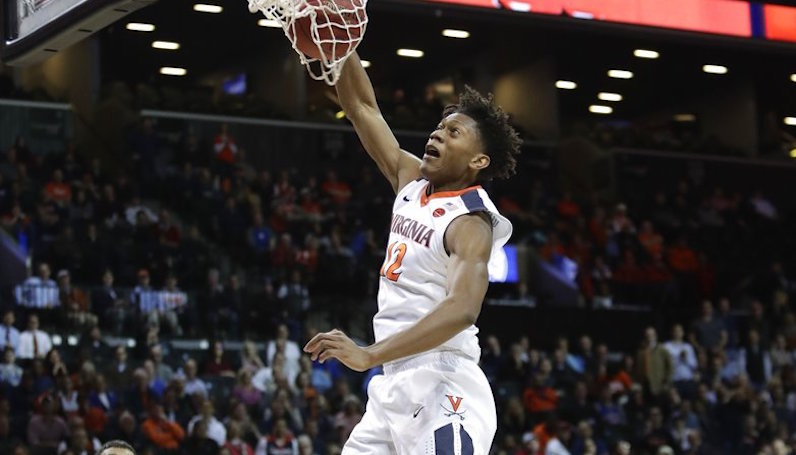 Virginia's De'Andre Hunter (12) dunks the ball in front of Louisville's Quentin Snider (4) during the second half of an NCAA college basketball game in the quarterfinal round of the Atlantic Coast Conference tournament Thursday, March 8, 2018, in New York. Virginia won 75-58. (AP Photo/Frank Franklin II)

A few hours after some rumors circled, Virginia made it official — star freshman forward De’Andre Hunter will miss the entire with a broken wrist. The announcement was made by head coach Tony Bennett.

According to the school, he will have surgery next Monday (March 19), and be out 10-12 weeks. He’s expected to make a full recovery.

Hunter, the ACC’s Sixth Man of the Year, averaged 9.2 points and 3.5 rebounds for UVA this season; however, that only tells a small portion of the story. In ACC play, Hunter took his game to a new level — 10.8 points, 58.2 percent true shooting and a player efficiency rating of 25.5.

A fast-rising NBA prospect, Hunter was also starting to flash an efficient three-point stroke, too. The 6-foot-7 combo forward was also named to the All-ACC Freshman Team — along with Marvin Bagley and Wendell Carter.

When I covered Hunter last week in Brooklyn at the ACC Tournament, he played at times with his wrist taped or wrapped.

This, of course, feels a lot like 2015 again, when the No. 1 seed Cavaliers dealt with a hand injury to then star wing Justin Anderson.

According to Synergy Sports, De’Andre Hunter shot 60 percent on isolation attempts this season; he also scored 1.27 points per possession on non-post-up attempts at the basket. That ranks 22nd in the ACC amongst players with at least 60 possessions. Simply put: Hunter is unstoppable at time. The cost of this injury, for this season’s team, is devastating.

Kyle Guy and UVA remain atop the final AP Poll