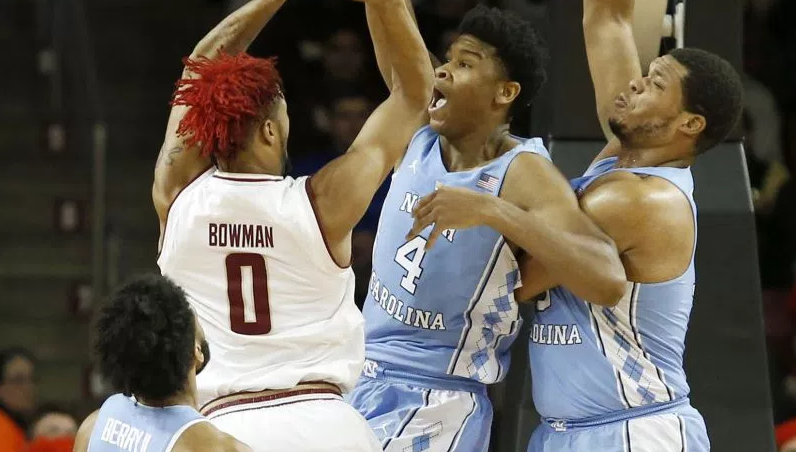 The 2015-16 season was a struggle-fest for Boston College.

The Eagles did more than just lose all 18 league games; under the guidance of Jim Christian, BC managed to scored just 85.5 points per 100 possessions against ACC opponents, according to KenPom.com. That was far and away the lowest offensive efficiency rating of any Power Five school.

Year 3 for Christian has shown growth, though, and that’s largely because of Boston College’s talented backcourt: Jerome Robinson and Ky Bowman. The team has already won multiple conference games, and BC is scoring 103 points per 100 possessions in league play. That still rates third-to-last in the conference, but it’s a striking improvement over a year ago.

Bowman has been a real revelation for the Eagles; he is one of a handful of ACC freshmen who score double figures (13.5 points), and he does so in a relatively efficient manner.

The rookie chucks nearly four three-pointers per game and connects on 43 percent of them — better than Joel Berry, Maverick Rowan and London Perrantes.

A point guard who can effectively operate pick-and-rolls is worth his or her weight in gold; so far, Bowman has proved more than capable in that regard. According to Synergy Sports, the Havelock, N.C., product has been a ball-handler in pick-and-rolls on 117 possessions this season. He has shot a sizzling 52.8 percent on such possessions. By comparison, that’s better than several of the league’s dribble-drive maestros: Matt Farrell (39.8 percent), Ja’Quan Newton (44.7 percent) and Dennis Smith Jr. (44.6 percent), per Synergy.

Boston College’s offense becomes even more dangerous in pick-and-rolls, however, when you factor in Bowman’s passing game. The freshman assists on 20.6 percent of his team’s made field goals while on the floor, but the Eagles score 1.01 points per possession when Bowman is either a shooter or a passer in the pick-and-roll, which ranks 18th in the ACC. That number will rise once he drops his turnover rate, too. Only 20 players in the ACC produce better than one point per possession while orchestrating this type of action.

Bowman struggled against conference foes Virginia and Syracuse, but for the most part, he has done nothing but rip nets in ACC play. Roy Williams will not soon forget the 33 points Bowman dropped on the Tar Heels in a near-upset back in January.

Robinson returned for his sophomore campaign with an eye on being this team’s best player. No more Eli Carter meant an opening at the lead guard spot for Boston College; he certainly has not shied away from the role, which has even caught the eye of NBA personnel people.

Robinson is a big combo guard who can do a little bit of everything. While his shooting has dipped since the home victory over NC State, he ranks fourth in the conference in scoring (19.3 points) and is one of just five ACC players scoring better than 19 points per game.

After using 22.7 percent of BC’s possessions a season ago, Robinson has upped his usage rate to 29.9 percent, according to KenPom, which is higher than NC State’s Smith (29.1 percent). This means nearly 30 percent of Boston College’s possessions when Robinson is on the court end with him shooting, drawing a foul (5.2 per 40 minutes) or turning it over.

The sophomore wing has found a niche moving without the ball, too — a major boon for his future NBA outlook. Robinson ranks fourth in the ACC in points per possession off of cuts: 1.46. That’s a better figure than a laundry list of the league’s top finishers, including Jonathan Isaac, Isaiah Hicks and Justin Jackson. Robinson shoots 82.8 percent on field-goal attempts off cuts, which ranks No. 1 in the league.

Bowman and Robinson have already worked their way to become one of the better backcourts in the ACC; the future is bright for these two, no doubt. This program has not gone to the NCAA tournament since 2009, and that streak will not end in 2017, but with Bowman and Robinson in place, change could be around the corner.