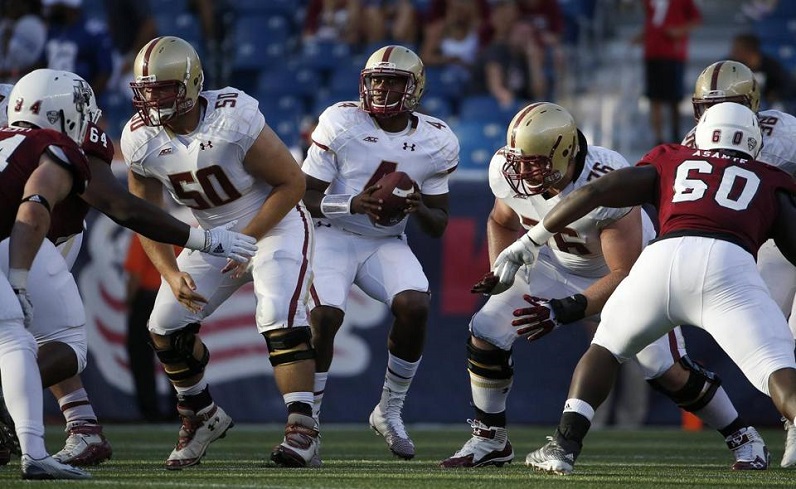 Boston College quarterback Darius Wade is in a battle for the starting spot with Anthony Brown Jr.

Boston College has a legitimate quarterback competition in training camp, as redshirt freshman Anthony Brown and junior Darius Wade are battling it out.

Brown came to Chestnut Hill knowing he’d have a chance to stake claim to the starting job early in his career. Wade assumed that role himself back in 2015, only to suffer a season-ending knee injury. Wade played sparingly in 2016, as Patrick Towles assumed the quarterback role for the Eagles.

Following BC’s August 8 workout, Addazio confirmed that the battle was between Wade and Brown for the starting job.

I’m really pleased right now with the development of the quarterbacks,” said Addazio. “We have a room full of those guys right now. That’s the first time since I’ve been here that that’s happened. Some of them are really young, but the two older guys (Wade and Brown) are performing at a high level right now. They’re doing some really good things and they’re competing. I’m really excited that there is some real competition going on, because the competition brings out the best in everybody.”

Brown has impressed the BC coaching staff with his pinpointing passing. In reports out of Eagles camp, Brown was noted for a 35-yard connection with fellow redshirt freshman Christian McStravick. Other reports highlighted a deep ball Brown completed to junior wideout Jeff Brown, as well as a strike over the middle to Kobay White, another redshirt freshman.

Brown chose Boston College over multiple ACC rivals, including Syracuse and Wake Forest, who were in his final top five. Then-Virginia Tech offensive coordinator Scot Loeffler liked Brown enough to offer him the spring before his senior year. Now Loeffler is in Chestnut Hill as BC’s offensive coordinator, working with Brown.

Brown put together a solid spring but was erratic in BC’s spring game, completing just 10 of 27 pass attempts for 84 yards. Wade looked much sharper, completing 16 of 27 attempts for 190 yards. Based on that performance alone, Wade seemed to set himself apart from Brown. But Brown has made considerable strides in recent weeks, improving his touch and cohesiveness with BC’s wide receivers and tight ends.

The big question with starting a redshirt freshman is how he will handle the big stage.

In Boston College’s case, that’s a really big stage. By mid-October, the Eagles will have played road games at Clemson and Louisville, along with home contests against Notre Dame and Virginia Tech.

The safer play for the Eagles is to start Wade. But Brown will get his chance this fall to prove he’s capable of being Boston College’s quarterback of the future, even if he doesn’t start.