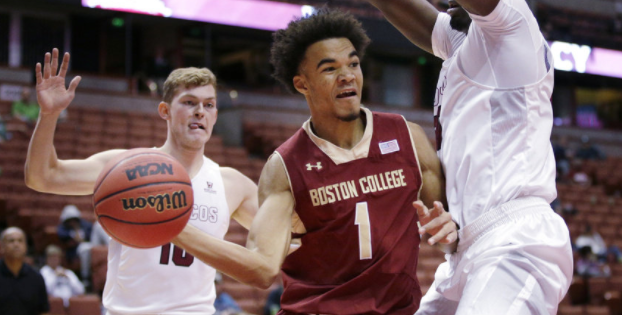 The Boston College Eagles, who are in action Wednesday against crosstown rival Harvard, are just 4-3 on the season, including a less-than-stellar loss to Nicholls State to open the season. However, they house one of the league’s best — Jerome Robinson, who is one of three ACC players currently averaging better than 20 points per game. If you’re in a category alone with Pitt’s Michael Young and Luke Kennard of Duke, you know you’re surrounded by good company.

Robinson’s play hasn’t gone unnoticed, too. The 6-5 guard is now landing on the radar for NBA teams. DraftExpress.com — one of the better sources for draft intel — currently has Robinson labeled as the No. 33 sophomore in the nation (they rank the top 100).

Robinson wasn’t named to the league’s All-Freshman team a year ago, but he did put forth a solid rookie season for the Eagles. As a sophomore, though, he’s built on that, considerably — his numbers are up across the board. He’s third in the ACC in scoring (20.1); his assist rate has jumped, too (23 percent). Robinson is rebounding more (8.6 per 100 possessions) as well, but what’s most impressive is his perimeter shooting.

The native of Raleigh, N.C. is playing a fewer minutes than he did a season ago, but Robinson’s shooting more frequently, and when he does launch, 35.8 percent of the time it’s a 3-pointer (up from 26.6 percent last season). Robinson has connected on 41 percent of his threes this season, which is the exact same percentage as Kennard. The Eagles, as a team, have been pretty great shooting threes this season; Boston College ranks No. 36 in the nation in three points shooting percentage (40 percent).

After attempting just 3.1 free throws per game as a freshman, Robinson is finding his way to the line more often this season; the sophomore gets up 5.4 free throws per game. His 38 free throw attempts rank 14th in the ACC. All of this has made him a more effective player. His player efficiency rating (PER) of 24.4 rates as the 16th best number in the ACC.

Over his last two games, Robinson has breathed fire from all over the court — scoring 27 points per game, while shooting 55.6 percent from the floor and 62.5 percent from deep. Robinson spends most of his time at the wing for BC, but he can run the point when Ky Bowman and Ty Graves (Ky and Ty!) need a breather, which makes him appealing as an NBA prospect. With his height, he can survey and see over the defense, and if Robinson can run a pick-and-roll, while keeping defenders honest with his jumper, then he can absolutely play in the league.

Of course, Robinson has a ways to go — he’s just one month into his second collegiate season. ACC play is a few weeks away, and when the opponents increase in difficulty, it will become a challenge to maintain his remarkable efficiency levels. Remember: nearly 31 percent of BC’s possessions run through Robinson, who who ranks fourth in the ACC in usage rate. That said, it’s cool to see how his progression has taken him from unheralded recruit to NBA prospect.