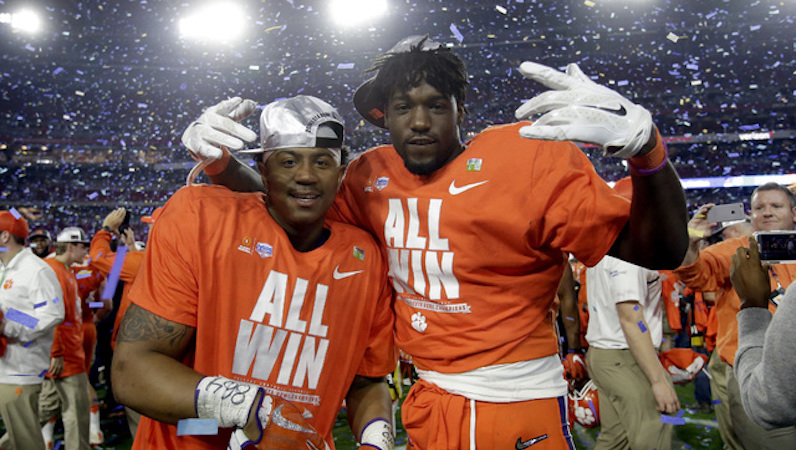 Quarterback wasn’t the only position in Clemson’s offense that needed to find a replacement.

This week, Clemson not only announced that Kelly Bryant would start at quarterback for the Tigers to open the season; co-offensive coordinator Tony Scott also stated that the team came to a conclusion on who its top running back would be entering 2017.

Junior back CJ Fuller gets the nod.

As we all know, Deshaun Watson and Wayne Gallman were absolute studs on offense for the Tigers. Think of any big game over the last few seasons involving Clemson; it’s likely that an image of at least one of those two will come to mind.

Over the last three seasons of ACC football — since Watson arrived at Clemson in 2014 — only 37 players have rushed for at least 100 yards and two touchdowns in the same game. Three different Clemson players have hit those benchmarks in that span of time: Watson, Gallman and Tyshon Dye (now a graduate transfer at East Carolina).

Watson and Gallman combined to reach this feat a combined five times.

Not starting from scratch

Unsurprisingly, Clemson is loaded at the skill positions, once again. Deon Cain is ready the be a star this season; Ray-Ray McCloud is one of the ACC’s most explosive playmakers on the perimeter.

CJ Fuller obviously has a lot to prove, but he’s no rookie. Fuller has 89 career carries to his name, and has five games of seven or more carries.

According to Football Study Hall, Fuller averaged three Highlight Yards per Opportunity in 2016. Highlight Yards measure how many yards a runner gains after the offensive line “does its job.”

That ranked third on Clemson’s roster — behind Watson and Gallman — amongst players with 40-plus carries. This is a somewhat subpar metric; Fuller will need to be a little more elusive in the open field.

Something to keep an eye on: Tavien Feaster — a former top-30 recruit, who competed for the starting running back job this season, too — outperformed Fuller in terms of Highlight Yards. Per Football Study Hall, Feaster averaged 7.5 Highlight Yards per Opportunity, which was the best on the team amongst players with 12 or more carries.

Both players will obviously be used this season, but perhaps Feaster has a chance to jump Fuller on the depth chart.

Last season, nine of Fuller’s 47 carries went for first downs; he also recorded six carries of 10-plus yards, per cfbstats.com.

Feaster, on the other hand, had 12 carries that went for first downs, and 9 carries of 10-plus yards.

He has also proven to be a solid receiver, which could help Bryant matriculate to full-time status at quarterback.

In his career at Clemson, Fuller has caught 11 of the 15 passes thrown in his direction (a catch rate of 73.3 percent) for 106 yards and two touchdowns, according to Football Study.

None of those receptions were more important, though, than the juggling snag he made on a wheel route in the national semifinal game against Ohio State.

Look for him to be more involved in this department, too.