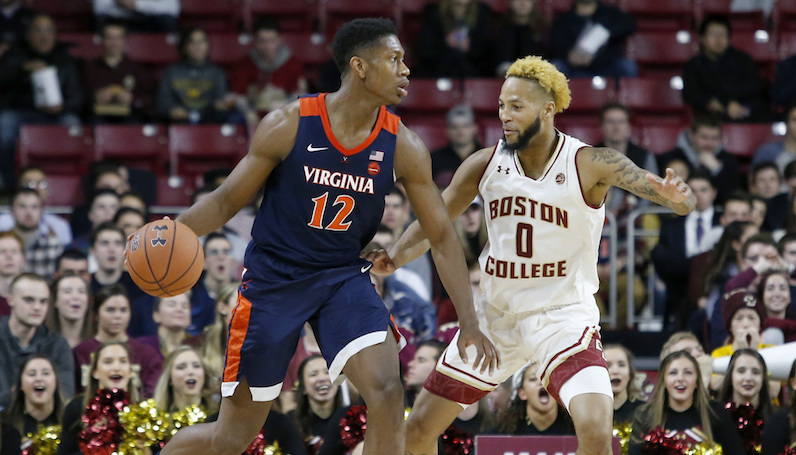 There’s a lot going on; you don’t have time to watch every ACC Basketball game. Or maybe you do, which, props. However, if you want to get caught up on what happened in the league last night, we’re here for you.

After a bit of a mini-slump — shooting just 32.4 percent from the field (16.7 3P%) from the VCU game through the win at Florida State — De’Andre did his thing against Boston College. In a nice road win for UVA, Hunter, one of the best players in the ACC, returned to form.

Great look across the #ACC by @bgeis_bird, it inspired me to have a look at @UVAMensHoops’s De’Andre Hunter’s season progression

The BC game was definitely his best production/efficiency combo since early wins over Maryland and Wisconsinhttps://t.co/tTiE9F4WYt pic.twitter.com/PWdpt7AZcj

(Thanks again to the always-informative Fifth Factor Plots for the chart. If you like college basketball, and aren’t already following that account, go do so now.)

Hunter scored 18 points on 11 field goal attempts, including two catch-and-shoot 3-pointers, and dished out two assists (16 percent assist rate this season). When Hunter has it going, his face-up game is clicking, too.

The ball moves faster than man

There are a lot of reasons to like this Virginia team. Let’s focus, however, for a second on this squad’s passing ability. Virginia, which features multiple future NBA perimeter options and dual point guard playmakers, has assisted on 58 percent of its field goals this season. That ranks 44th nationally in assist rate, per KenPom.

Would you like to see that in action? Of course you do! Here’s what I think is the play of the game from the road win over Boston College.

Mamadi Diakite, who was excellent again (18 points, 12 FGA), catches the ball on a short roll from Kihei Clark. Ky Bowman rotates and bumps the roll, which forces Diakite to make read, which he does. As Dre Hunter cuts down, he draws Jordan Chatman in from the corner.

Kyle Guy, one of the most dangerous catch-and-shoot players in the nation, is wide open in the corner. Diakite hits Guy on a nice dish, and Boston College must continue to rotate. Jairus Hamilton sprints down to closeout on Guy, who in turn makes the extra pass — hitting Ty Jerome, another outstanding spot-up player, for a 3-ball.

Well, I picked quite a week to write about Virginia Tech’s efficient offense, right? Because in the road win at Georgia Tech, the Hokies struggled mightily. Georgia Tech is a strong defensive team — with a nice rim protector in James Banks (3.5 blocks per 40 minutes) — but Virginia Tech had its worst offensive game of the season.

Pitt did a Good

Pittsburgh and Jeff Capel won an ACC basketball game! It was a thing that happened! More on that overtime victory over Louisville here.

Everyone that pays attention could see it before the season started: Syracuse had the ability to be good this season; to do so, though, it would have to come in an uglier fashion. So far, yeah, that’s the case.

After a home win over Clemson, the Orange are 11-4 and 2-0 in the ACC. A top-35 team in KenPom, Syracuse ranks 73rd in adjusted offensive efficiency and 12th in adjusted defensive efficiency. Jim Boeheim’s zone has allowed just 0.75 points per possession (44.2 eFG%) in the half court, per Synergy Sports.

Including transition and half-court possessions, the Tigers scored under 0.8 points per possession against the Orange, while shooting 5-of-20 on 3-point attempts (25 3P%). Syracuse blocked seven shots, too.

FSU wins defensive struggle over Miami (No, not football)

Both teams shot under 24 percent from downtown; the Hurricanes managed to score just 0.91 points per possession, too.

Miami, on the other hand, got good production from Ebuka Izundu (65.3 eFG% this season) and Chris Lykes.

Unfortunately, this team’s seven-man rotation just doesn’t quite have enough at the moment. Can Jim Larranaga and this squad turn it around? Some help from the NCAA would go a long way.

ACC Bracketology, One Number to Know: Zion Williamson shows off his passing skills