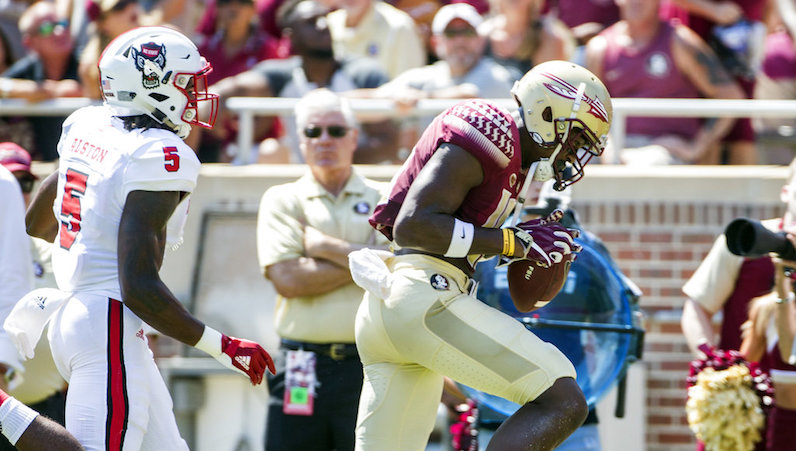 Auden Tate was in the midst of a career day against NC State, when bad luck struck. After hauling in a 51-yard bomb from James Blackman — the longest reception of his career — in the third quarter, Tate injured his shoulder. He never returned to the game; NC State hung on to win.

He returned to practice on Tuesday, but the 6-foot-5 receiver was listed as day-to-day for most of this week; on Thursday, however, Jimbo Fisher said he expects Tate to play on Saturday against Wake Forest.

Here’s why that’s bad news for the undefeated Demon Deacons.

There are plenty of tall, deep threats in the ACC — like Steph Louis, Jaylen Smith, and Andre Levrone. Auden Tate, however, is the biggest. Tate carries on the tradition of Florida State seeming to invariably how some giant wideout they pouched from the basketball court. Greg Carr, Rodney Smith and Kelvin Benjamin have to be proud.

Despite having his day cut short against the Wolfpack, Tate collected nine catches on 11 targets (82 percent catch rate, per Football Study Hall) for 138 yards and a touchdown. The number of targets, receptions and yards were both career highs as Tate hooked up with Blackman in a variety of ways — deep balls, fades, bubble screens and deep comebacks. It was impressive.

That performance also makes Tate one of just 21 FBS players this season to record nine-plus receptions for at least 130 yards and a touchdown. Only two other ACC players have hit those benchmarks in one game: Cam Phillips and Jaylen Smith.

Since the 2000 season, this type of performance has happened only 76 times involving an ACC player. Some of the other names on that list jump out, too: Calvin Johnson, Sammy Watkins, Deandre Hopkins and Demaryius Thomas.

Not much of a sample yet, but…

It’s all really good, so far. Auden Tate and Florida State have played only two games this season, but Tate ranks 11th in the ACC in yards per reception (16.3); he’s one of 40 players with 10-plus receptions in the league. Keith Gavin, Tate’s teammate, is the only other ACC player to play two or fewer games with double-digit receptions.

Heading into 2017, Tate looked like an intriguing option. Currently, he’s third on FSU’s roster with 16 targets, per Football Study Hall. Tate has been targeted on 23.5 percent of the team’s pass attempts; that’s up from 11.1 percent in 2016.

Tate has caught 69 percent of the passes tossed his direction, and he’s averaging 11.2 yards per target.

The Demon Deacons are 4-0, thanks in large part to an excellent defense. Wake Forest has several playmakers in its secondary; the team has allowed just one 100-yard receiver this season, too, which came last weekend against Appalachian State.

Wake Forest has allowed just 10 pass plays of 20-plus yards — good for sixth in the ACC. According to Football Study Hall, Wake’s defense ranks No. 16 in the FBS in Havoc Rate (20.7 percent). On pass defense, the Deacs have given up 1.35 Isolated Points per Play — No. 53 in the nation.

All of that is solid; however, Wake Forest hasn’t seen someone quite like Auden Tate in 2017. This game, which will be nationally televised on ABC, will also feature an 0-2 Florida State team, desperate for its first win.

Is James Blackman FSU’s quarterback of the future?