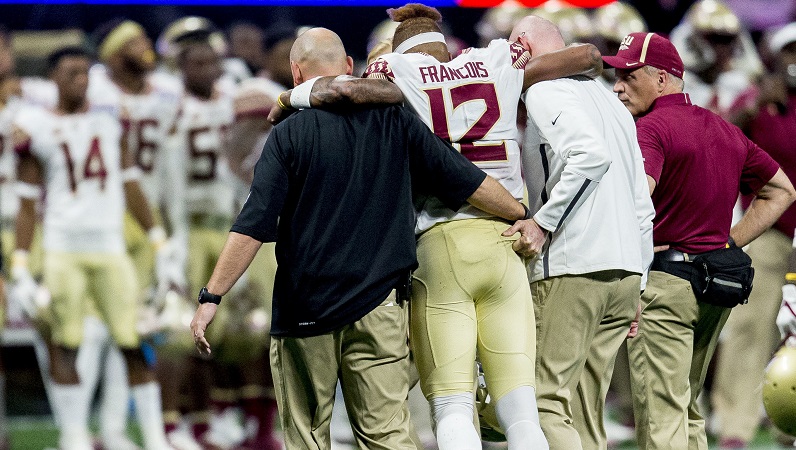 Florida State quarterback Deondre Francois (12) is helped off the field after an injury during the second half against Alabama, in an NCAA college football game, Saturday, Sept. 2, 2017, in Atlanta. (Vasha Hunt//AL.com via AP)

To say that it’s been a hectic start to the 2017 season for Florida State is an understatement. After losing to Alabama 24-7 thanks to one of the worst special teams showings in school history, the Seminoles have been forced to be idle in each of the last two weeks because of Hurricane Irma.

The biggest tragedy to this point for FSU however, is the loss of quarterback Deondre Francois. Francois tore his patella tendon while being sacked in the fourth quarter of the season-opening loss at Alabama.

Against North Carolina State on Saturday, James Blackman is set to make his first career start. Blackman will become the first FSU true freshman to start a game under center since Chip Ferguson in 1985.

With a number of players dedicating the remainder of the season to Francois, there has become a question as to whether the redshirt sophomore has played his last game as a Seminole. Blackman, who didn’t enroll in June, wasn’t as highly-recruited as Francois, but…