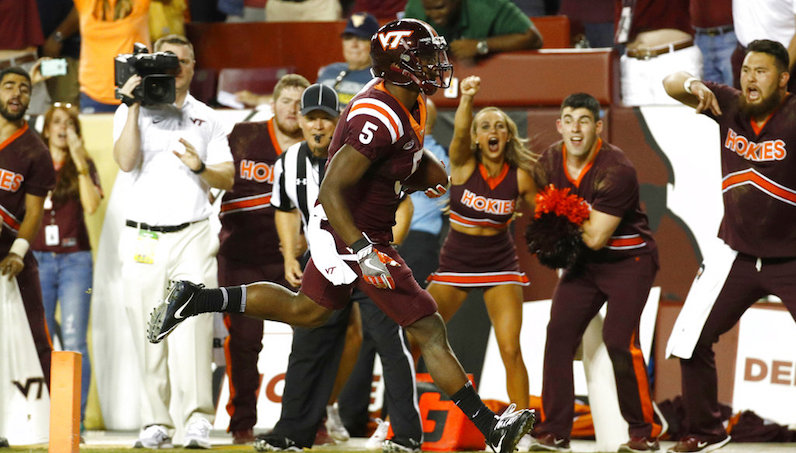 Back in July, Cam Phillips of Virginia Tech was hands down the most stylistic player at ACC Media Days. Phillips, Tech’s star senior wide receiver, rocked a pair of sunglasses that were straight up out of the Russell Westbrook wardrobe.

VT's Cam Phillips not holding back with the outfit. Apparently he wears these glasses all the time. pic.twitter.com/NYV5Z4p8wg

And I guess if you’re going to dress like an NBA MVP off the court, you need to be able to play, too. So far in 2017, even with a freshman at quarterback, Cam Phillips has done just that.

Virginia Tech didn’t have to look too hard to find its top receiving option when Isaiah Ford decided to turn pro. The ascension of Cam Phillips into a No. 1 receiver is no surprise; he was more than qualified for the role.

More of the same, really

The key for Cam Phillips would be how quickly he was able to connect with redshirt freshman quarterback Josh Jackson. Well, it didn’t take too long, that’s for sure.

Jackson has targeted Phillips on nearly 40 percent of his pass attempts — 19 in total — per Football Study Hall. Sean Savoy is the only other Hokie with double-digit targets (12). Phillips has hauled in 12 of those for a catch rate of 68.4 percent.

That’s a strong catch rate, especially when you factor in his explosiveness, too. Phillips is averaging 17.5 yards per catch (No. 9 in the ACC) and 12 yards per target. The senior is tied for second in the nation with six receptions of 20-plus yards, including a 32-yard touchdown against West Virginia.

The touchdown reception against the Mountaineers wasn’t even the best catch that he had in the win over WVU.

In total, Phillips racked up seven receptions for 138 yards against WVU; he became just the fourth Hokies since the 2000 season to catch seven passes for at least 130 yards in a single game.

If Phillips continues his current pace, he has the ability to eclipse the all-time receptions and receiving yards records at Virginia Tech — which were just set by Isaiah Ford, his former teammate.

More importantly — at least for second-year coach Justin Fuente — it will help the Hokies win a bunch of games, too. Phillips could easily be the best offensive player on a division-title team.

Virginia Tech still in the hunt for speedy recruit