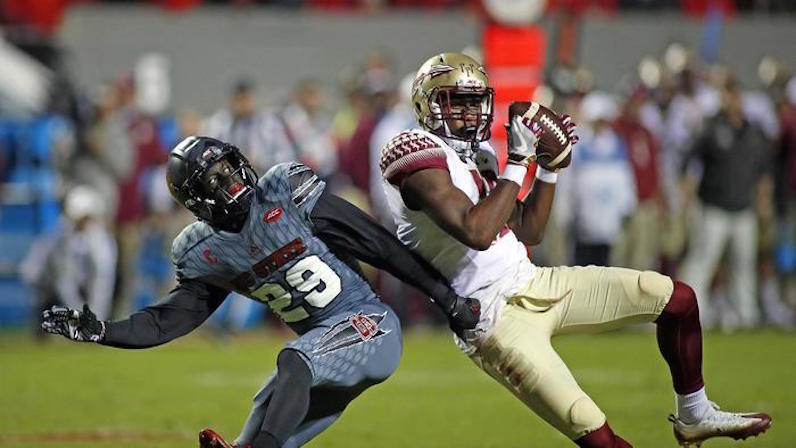 Florida State will enter the 2017 season as one of the best football teams in America. Despite departures at key offensive positions, like running back Dalvin Cook, the Seminoles look prepped to win their first conference championship since 2014.

Quarterback Deondre Francois is back but will have to adjust to life without his top three wide receivers from 2016. Now, two players climb to the top of the list of likely receiving threats for Francois in 2017: Auden Tate and Nyqwan Murray.

Travis Rudolph, who declared early for the NFL Draft, is the biggest name to leave Tallahassee, but track star Kermit Whitfield — one of the ACC’s hidden gems — is also gone. So, too, is Jesus Wilson. Those three combined for 120 receptions, 1,625 yards and nine touchdowns last season.

Here’s a look at who is poised to make up that lost production.

When Florida State’s team walks off the bus, this will be the first receiver you notice. The 6-5 Tate is hard to miss, and his size is part of what makes him such an appealing red-zone target and vertical threat.

According to Football Study Hall, Tate was targeted 45 times on his 25 receptions, which gives him a catch rate of 55.6 percent. That is a good number, but considering his size and catch radius, expect that number to jump in 2017. He averaged 16.4 yards per catch — second on the team — and a solid 9.1 yards per target.

Tate hauled in six touchdowns, including two red-zone snags against Louisville. The rising junior caught 11 passes of 15-plus yards, and 18 of his receptions went for first downs, per cfbstats.com. Tate was one of just 21 ACC players to record at least six touchdown receptions in 2016, too.

Despite a shoulder injury that forced him out early in the Orange Bowl, Tate finished the season strongly. In wins over NC State, Boston College, Syracuse and Florida, Tate snagged 16 balls for 268 yards and two scores. The win over BC was also Tate’s first career 100-yard game.

After a foot injury in October shut Jesus Wilson down for the rest of the season, Murray found himself in a much larger role. He did not disappoint, either.

Following the absence of Wilson, Murray went bonkers (in a good way). He was one of the best playmakers on the field in the thriller against Clemson: six receptions on eight targets (catch rate of 75 percent) for 96 yards and a touchdown. A week later in Raleigh, Murray was targeted a game-high 14 times; he racked up nine receptions for a career-high 153 yards.

In total, per Football Study Hall, Murray posted a catch rate of 57.4 percent and ranked second on the team with a yards per target average of 9.6. According to cfbstats.com, Murray hauled in four receptions of 25-plus yards.

However, Murray’s longest reception of the season, and best highlight, came in the Orange Bowl, when he torched Michigan’s defense for a 92-yard touchdown bomb, courtesy of Francois.