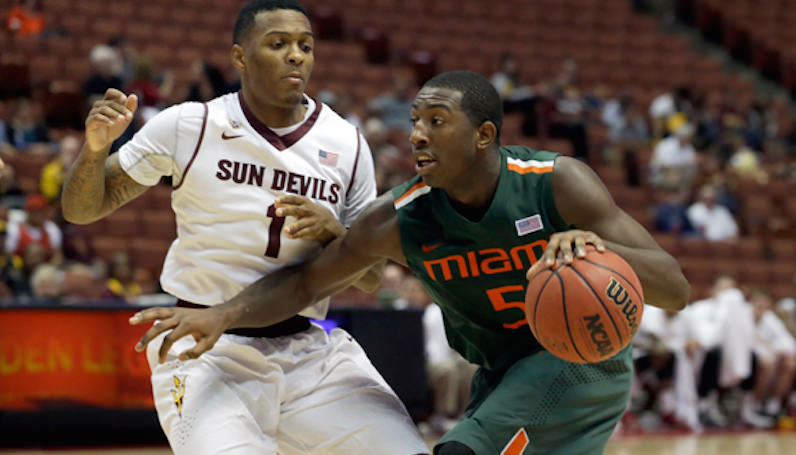 The Miami Hurricanes are a tricky team to figure out.

The Canes have great a defense and excellent young talent, like Bruce Brown and Dewan Huell. However, all but two of Miami’s wins this season have come against teams currently outside of KenPom.com’s top 100. The lone exception — prior to this past weekend’s win over Pittsburgh — was NC State. Because of course.

Davon Reed has been a constant for Jim Larranaga’s club, though. Reed was a fixture of Miami’s rotation during his first three seasons in Coral Gables, but he’s never played like this before (33.9 minutes per game), nor has he ever been a featured piece, which is exactly where he finds himself in 2016-17 — second on Miami in scoring at 14.7 points. Ja’Quan Newton paces the team’s scoring: 15.1 points per game.

In the win over Pitt, Reed scored 18 points on 11 field-goal attempts in 35 minutes of action. Reed has averaged 19 points while shooting 41.2 percent on three-pointers in Miami’s two conference victories.

Nearly 22 percent of Miami’s possessions end with Reed shooting, getting fouled or turning the ball over when he’s on the floor. That’s an above-average and career-high rate. He’s shooting more threes than ever before, too: roughly 55 percent of his field-goal attempts have come from beyond the arc. In conference games, Reed is jacking a prolific 7.8 three-pointers per game.

He’s been especially good coming off screens, like such:

According to Synergy, Reed is shooting 52.4 percent off screens this season; he is also scoring 1.35 points per possession on such opportunities, which ranks second in the ACC.

Reed has been very good in the catch-and-shoot game, too. In fact, he has been one of the best in the conference. Per Synergy, Reed shoots better than 40 percent on catch-and-shoot opportunities; he’s also scoring 1.21 points per possession on these juicy possessions, which ranks 33rd in the ACC.

Miami — 2-2 in ACC play — is on the road for the next two games: Wake Forest, then a Saturday showdown with Duke. After that, though, the Hurricanes return home for three straight at the Watsco Center: Boston College, North Carolina and Florida State.