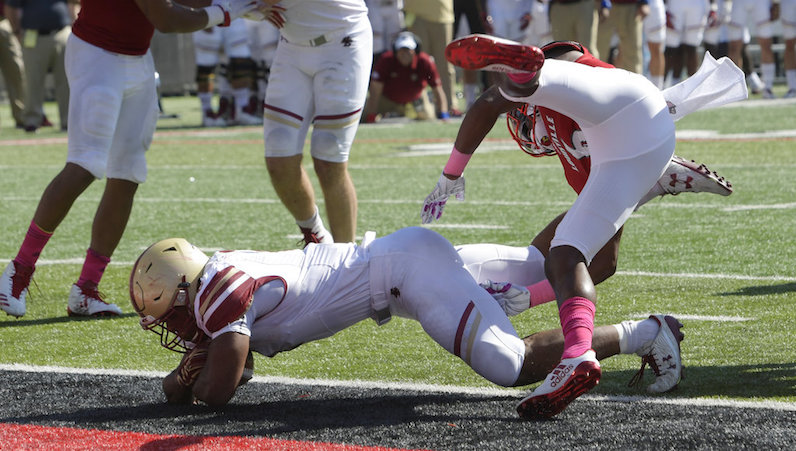 It’s been a turbulent 2017 season for Steve Addazio and Boston College. Coming off the program’s first bowl win in a decade, the Eagles have been met with frustration. Injuries have cost some of the team’s best players game action; and the results on the field have been largely a disappointment, too.

That, however, changed — at least momentarily — on Saturday when Boston College upset Lamar Jackson and Louisville. The game ball goes to freshman running back AJ Dillon.

AJ Dillon and a day for the ages

What happened on Saturday in the win over Louisville has to be what BC fans dreamt of after Dillon flipped his commitment from Michigan to Boston College last December. Dillon ran for 272 yards and four touchdowns on 39 carries.

If not for the artist formerly known as Andre 2000 — Andre Williams — Dillon would’ve rewritten Boston College’s record book. The performance was third-best single-game rushing total in program history, and the most ever by a true freshman at BC.

According to Sports Reference, this was just the fourth time since the 2000 season that an ACC player recorded at least 35 carries and 250 yards rushing in a single game. The 272 yards are good for the fifth most in an FBS game this season, too, per Sports Reference. Dillon’s four rushing scores are tied for the second most in a game this season in the FBS; only TaQuon Marshall of Georgia Tech’s five TD performance against Tennessee ranks higher.

Dillon was named ACC co-offensive back and rookie of the week.

Boston College’s offensive line did a nice job creating holes for Dillon — who exited the game with an Opportunity Rate of 49 percent, according to Football Study Hall. Dillon also averaged a solid 6.24 Highlight Yards per Opportunity. This means that Dillon averaged an additional 6.24 yards per carry after the offensive line “did its job” blocking for him.

Speaking of highlights, though, don’t forget the lasting image of this performance, courtesy of the good folks at BC Interruption.

AJ DILLON JUST THREW THAT POOR MAN DOWN LIKE A RAGDOLL

Posted by BC Interruption on Saturday, October 14, 2017

Dez Fitzpatrick hauled in a 40-yard touchdown toss from Lamar Jackson that made the game a one-possession affair. Dillon responded almost immediately. Chucky Williams is a good defensive player for Louisville, but AJ Dillon just threw him aside with ease en route to a 75-yard touchdown run. That’s absolutely nasty.

Dillon has 13 carries of 10-plus yards on the season; that’s one of the best numbers in the ACC amongst running backs, per cfbstats.com. The Eagles will need plenty more of that, too, as 2017 rolls on.