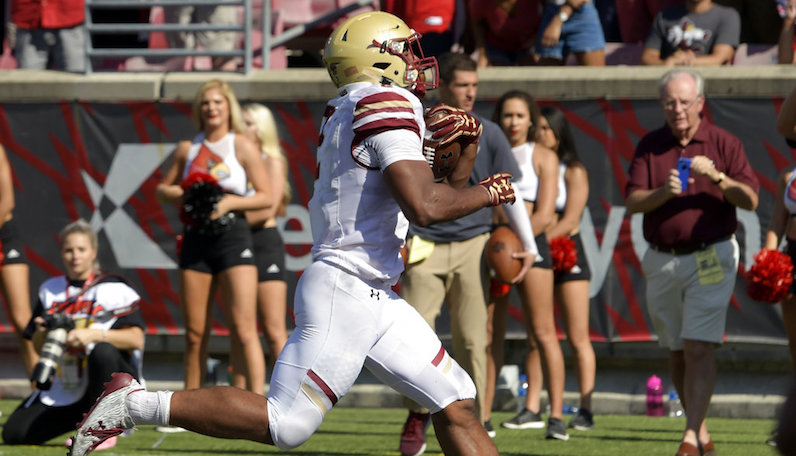 The Atlantic Coast Conference Football Players of the Week have been recognized following their performances in week seven of the 2017 season.

Also named the Walter Camp National Offensive Player of the Week, Dillon finished with the third-best single-game rushing total in Boston College history with 272 yards to go along with four touchdowns in Saturday’s 45-42 victory at Louisville. His rushing total is the most by a true freshman nationally in 2017, the second-most by a freshman in ACC history and the most ever by a Boston College freshman. The 272 rushing yards rank as the fifth-most by any player in the nation this season. Dillon’s four rushing touchdowns tied for the third-best performance in Boston College single-game history.

Dungey was 20-of-32 passing for 278 yards and matched his career high with three touchdown passes to lead Syracuse to a 27-24 victory over No. 2 Clemson. He was also Syracuse’s second-leading rusher with 61 yards on 21 carries. Dungey accounted for 339 of the Orange’s 440 yards of total offense against the Tigers and each of his touchdown tosses went to a different receiver. Dungey’s 61 yards on the ground raised his career rushing total to 1,030 yards, making him the sixth quarterback in Syracuse history to run for at least 1,000 yards. Dungey directed touchdown drives of 72, 80 and 82 yards against one of the most formidable defenses in the nation, and engineered a 16-play march that used up 6:04 and resulted in the go-ahead field goal with 9:41 to play. On Syracuse’s final series, Dungey converted a key third-and-11 by hitting Steve Ishmael for a 13-yard gain. Facing another third-and-long with less than two minutes to go, Dungey ran up the middle for eight yards and a first down to seal the upset.

Lindstrom helped pave the way for a Boston College offense that rushed for a season-high 364 yards and piled up 555 yards of total offense in the 45-42 win at Louisville. Lindstrom graded out as the Eagles’ best lineman at 88 percent and led the team with three pancake blocks and four knockdowns as Boston College scored its most points in an ACC road game under head coach Steve Addazio. Lindstrom has graded out as BC’s top lineman throughout the year.

Philips totaled four receptions for a game-high 94 yards and a touchdown in Syracuse’s 27-24 victory over No. 2 Clemson. In the second quarter, Philips caught a 66-yard touchdown from Eric Dungey, the longest pass play of the season for Syracuse, to give the Orange a 14-7 lead in the first quarter. Philips moved into 10th place on the Syracuse career record list for most receiving yardage (1,734). He is sixth among active FBS receivers and second on the Orange all-time ledger with 190 career catches.

A week after catching the game-winning touchdown against Florida State with less than 10 seconds left in the game, Langham caught the Hurricanes’ most important pass once again Saturday in a 25-24 win over Georgia Tech. Langham hauled in a 28-yard reception on fourth-and-10 on Miami’s final drive to help set up the game-winning 24-yard field goal. Langham had his best day s at Miami with five catches for 100 yards against the Yellow Jackets, including a long reception of 32. He had caught just four balls in his career entering Saturday’s game.

Ferrell had 3.5 sacks and 5.5 tackles for lost yardage in last Friday night’s 27-24 road loss at Syracuse. His 5.5 tackles for loss tied for the most in the nation by any player this year at the FBS level. He was just half a sack off the single-game Clemson record and just a half-tackle for loss shy of the school record in that category. He had nine total tackles, seven of which were first hits.

Bennett led Syracuse in tackles for the fifth game in a row, making nine stops in the Orange’s 27-24 victory over No. 2 Clemson. Bennett also recorded the first sack of his career for a loss of eight yards in the third quarter to thwart a potential Clemson scoring drive. After the sack, the Tigers did not gain another first down during the series and missed on a field goal attempt. Bennett helped key an Orange defense that allowed only 113 yards rushing, more than 124 yards below Clemson’s season average of 237.3. The Tigers generated just 317 yards of offense, well below their season average of 471 yards per game.

Blanding repeated as the ACC Defensive Back of the Week after making 10 tackles and breaking up a pass to lead the Virginia defense a 20-14 win at North Carolina. Blanding and his fellow teammates in the secondary helped to hold UNC to just 46 passing yards, and the Cavaliers picked off three passes during the game.

Badgley was crucial to pushing Miami past Georgia Tech, 25-24, Saturday afternoon at Hard Rock Stadium. Badgley finished a perfect 4-for-4 on field goal attempts, including his game-winning 24-yarder with four seconds remaining on the game clock to cap a 15-play, 85-yard drive. Badgley came just one field goal shy of his career mark (five) and ranks second in all-time field goals made at Miami with 69. He is just four behind Miami’s all-time leader, Carlos Huerta.