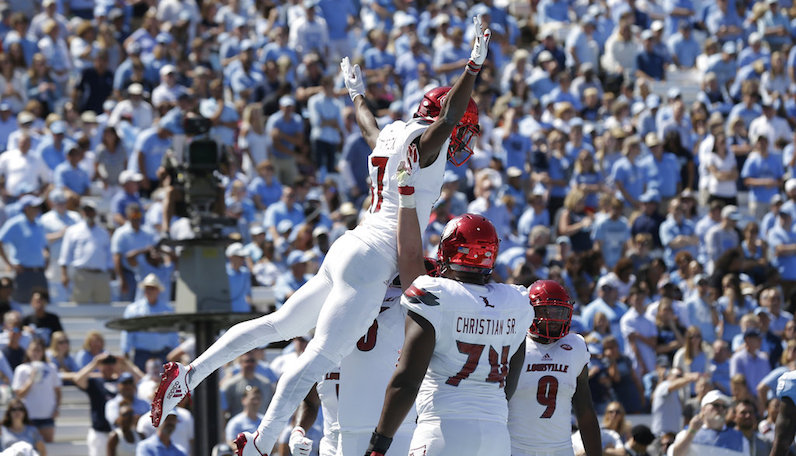 Louisville's Dez Fitzpatrick jumps while celebrating with teammates following his touchdown against North Carolina during the first half of an NCAA college football game in Chapel Hill, N.C., Saturday, Sept. 9, 2017. (AP Photo/Gerry Broome)

Jaylen Smith is Lamar Jackson’s No. 1 weapon on offense, but Louisville has found another young, talented playmaker: Dez Fitzpatrick.

The ACC has a surplus of excellent pass-catchers, but only one player has more touchdowns through the air than anyone else. That would be Dez Fitzpatrick; the rookie receiver has six touchdown catches — No. 1 in the ACC.

A highlight waiting to happen

Louisville has dropped just one game on the season — a primetime affair against No. 2 Clemson. Dez Fitzpatrick was one of the few bright spots for the Cardinals that night; it’s a trend that’s continued throughout the season.

Fitzpatrick has recorded at least two receptions in every game this season; the Kent State game is the only contest when the freshman hasn’t collected a touchdown.

Jaylen Smith is the fulcrum of the team’s passing game, but Fitzpatrick has found his niche. The 6-foot-2 wideout recorded 24 targets, per Football Study Hall — third most on the roster. He has 16 receptions, which translates to a catch rate of 66.7 percent. Fitzpatrick averages 17.5 yards per reception — fifth best in the ACC — and 11.4 yards per target.

Three of his receptions have gone for 25-plus yards; 37.5 percent of his catches have turned into touchdowns, too. That’s quite the ratio. According to Sports Reference, Fitzpatrick is one of only four FBS players with at least five touchdowns on 20 or fewer receptions.

Lamar Jackson has quickly developed a trust in Fitzpatrick, too. Per cfbstats.com, the young freshman has five receptions on third down with seven-plus yards to go.

He’s averaging 17 yards per catch on those situations; four have gone for first downs.

Next up for Louisville is an NC State defense that has been pretty good so far in 2017, but has also been susceptible to big plays against the pass. If the Wolfpack keep an extra set of eyes on the always-elusive Jackson, then Fitzpatrick could be an integral part of Louisville’s offense once again.

Where Louisville basketball goes next with recruiting