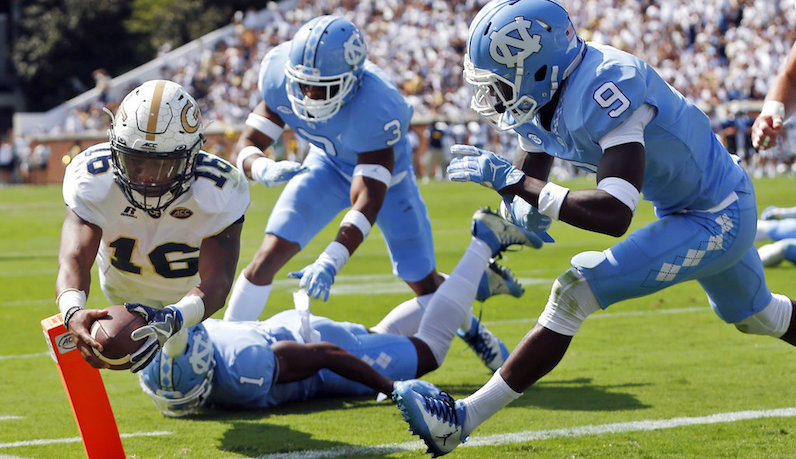 Georgia Tech quarterback TaQuon Marshall (16) dives into the end zone for a touchdown against North Carolina's Dominique Ross (3) and K.J. Sails (9) in the first half of an NCAA college football game Saturday, Sept. 30, 2017, in Atlanta. (AP Photo/John Bazemore)

Currently in the ACC, there are 27 players that have recorded at least 10 carries and average five yards or more per carry. Seven of those players — almost 26 percent — hail from one program: Georgia Tech.

Yes, once again, the Georgia Tech Yellow Jackets of Paul Johnson are the kings of the ground game when it comes to ACC football. The offensive line — which is currently banged up — has done an excellent job creating holes. Tech currently ranks 10th nationally in team Opportunity Rate, per Football Study Hall — the percent of carries that go for at least five yards.

Read more, though, to find out just how dominate TaQuon Marhall and Georgia Tech are.

One of a kind

This is year 10 for Paul Johnson down on The Flats in Atlanta. Barring some unforeseen collapse, 2017 will mark the tenth straight season that Georgia Tech has led the ACC in rushing. This, however, looks like the program’s most potent attack yet.

The Yellow Jackets have, so far, rushed for 1,584 yards — 396 per game (No. 2 in the FBS). That’s right — not only does Tech lead the ACC in yards per game, they also led the league in total rushing yards, despite playing just four games.

Additionally, this marks just the sixth time since the 2000 season that an FBS team has run for at least 1,500 yards in its first four games. It’s just the third time that a Power 5 school has hit those benchmarks — Georgia Tech (2011), Baylor (2015) — per Sports Reference.

Georgia Tech averages more than 11 run plays of at least 10 yards per game; the Jackets also average nearly three runs of 20-plus yards per game, too.

As I wrote last month, TaQuon Marshall is the straw that stirs this drink in the ATL. Marshall, a junior, is a special talent at the quarterback position.

In the loss to Tennessee: Marshall became just the fourth ACC player since the 2000 season to carry the ball at least 40 timesin one game. In fact, Marshall’s 44 carries are the most by one player in a game since that 2000 season.

TaQuon Marshall and power back KirVonte Benson get their top share of the carries; however, Georgia Tech is loaded with additional weapons out of the backfield. That includes freshman B-back Jerry Howard.

Howard has only 14 carries on the season, but he’s made the most of them, that’s for sure. The rookie runner has 193 yards (9.6 per carry) on the ground in 2017 — including a 65-yarder that he housed against Jacksonville State.

Obviously this is influenced by that long touchdown run, which came on his second career carry, but Howard averages 12.3 Highlight Yards per Opportunity, according to Football Study Hall. He has five carries of 10-plus yards, too.

Paul Johnson: For once in my life, I’m glad we’re with Russell Athletic